Hidden history, the voices behind the archives: The case of a 19th-century Japanese scholar working in Hiroshima

When tracing history, it is vital to study not only published books from a given period, but also the diaries and letters of people living at the time. Consequently, we can then deduce the personality and thoughts of those who populated that era, and appreciate a more nuanced historical background. Prof. Kubota’s research on the diaries and letters of Yoshiki Kondo, a Kokugaku scholar who worked in Hiroshima in the late Edo era, reveals his personality and academic path up until he put down roots in the Hiroshima region.

‘Kokugaku’ is Japanese classical academic discipline covering a broad range of topics including literature, history and Shinto religious study, which started in the middle of Edo era (late 17th to 18th century) in Japan.  A Kokugaku scholar, Yoshiki Kondo (1801–1880), devoted himself to researching and teaching Kokugaku, moving from place to place starting with his birthplace in Iwabuchi, Suo province (now Hofu, Yamaguchi prefecture).  Even after being adopted* by the samurai Kondo family of the Hagi clan, he devoted his life to his studies through his interacting with friends in various provinces.  It is well known that the first half of Yoshiki’s life was spent in Aki province, in what is now Hiroshima prefecture.  However, conventional research has not been able to determine the exact time at which Yoshiki began teaching Kokugaku in Hiroshima or the type of personal connections that formed the basis of his activities there.  Studying the “Diary of Yoshiki Kondo” and the “Letters of Yoshiki Kondo” from the Yamaguchi Prefectural Archives, as well as letters from Yoshiki to Shinto priest Yorisada Inoue of Mibu, Aki province, this research traces the details of Yoshiki who became an active scholar in the Hiroshima region.  As a result, Yoshiki is revealed vividly as a much beloved and sociable person and his personal connections helped him to flourish in academia at that time. 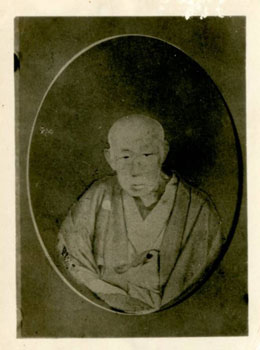 In 1824, Yoshiki received a very attractive offer of adoption from the famous Motoori family, the leading scholarly family of Kokugaku, while studying in Wakayama near Kyoto/Osaka.  However, he refused the offer because he had no confidence in becoming heir to such honorable family.  He believed that the reputation of the Motoori family would be damaged by his refusal if he remained in Kyoto/Osaka; therefore, he decided to continue his studies far away in western Japan in places such as Hagi in Yamaguchi, Kyushu island, or Hiroshima. Subsequently, in 1830, he befriended Yorisada Inoue in Kyoto and told Yorisada that he would pursue his Kokugaku studies in Hiroshima, where there were no active Kokugaku scholars during that time.  The following year (1831), with the help of Yorisada and after an introduction to Dozan Ueda, who was a patron of Yoshiki as well as a village headman of great wealth in the Suo Daido region, Yoshiki met the great Confucian scholar Rai Kyohei in Hiroshima, with whom he was able to pursue his Kokugaku studies in Hiroshima for the first time.  However, Kyohei disliked Yoshiki’s sociable character; Yoshiki heard that Kyohei had been criticizing him, and expressed his anger in letters to Dozan.  In the third volume of his published essay Gouna no Utagatari, Yoshiki described his meeting with Kyohei when he first went to Hiroshima saying he admired Kyohei’s character and studies, which evidently differed from his true feelings.  These differences in sentiment between his personal correspondence and his public writings remind us that in order to know the historical facts, we should not interpret literally what was written by people of the early modern period in Japan.

* In Edo era, Japan, it was common practice for families lacking a male heir to adopt an unrelated adult male. 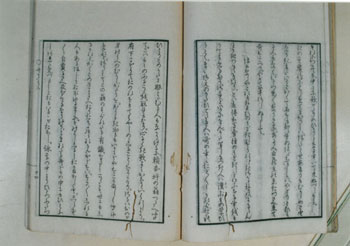 Pages written about Rai Kyohei in
Gouna no Utagatari Vol.3(1) 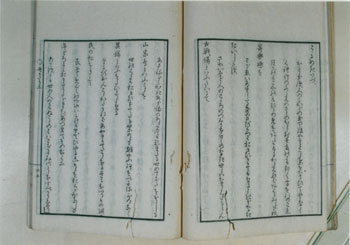 Pages written about Rai Kyohei in
Gouna no Utagatari Vol.3(2) 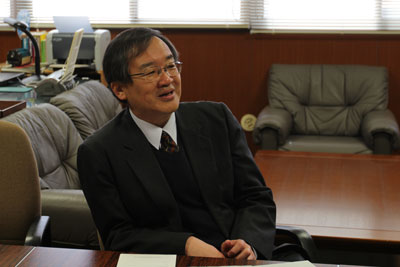