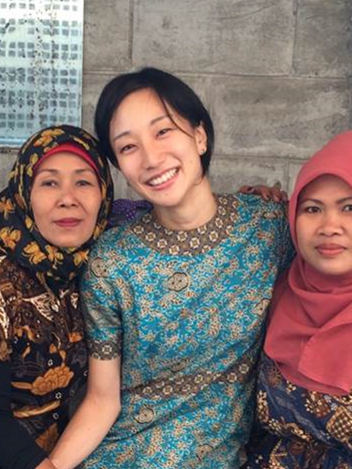 1. About the country of my internship

Indonesia is a country in South East Asia. It has 1890,000 km2 which is five times larger than Japan. The population of Indonesia is also quite big, 255,000,000 people are in whole Indonesia. Most of all the ethnic groups in Indonesia belong to Malay and the number of the groups is about 300 (including Java and Sunda). The language they speak is Indonesia. The capital city, Jakarta is at the west part of Java Islands. Bandung, the city I had internship is also at west Java. Although these cities are in same island, it takes 4 to 5 hours from Jakarta to Bandung. Now we can see how large this country is.

2. About the local life and the culture

There are Sunda people in Bandung. They speak Indonesian and Sundanese, so if you can speak basic Bahasa Indonesia, it will help you. However, you can communicate with students and professors in Department of Japanese Language Education only in Japanese.

Bandung stands at high altitudes. Its temperature is not like Jakarta. Every morning and night, I feel cold and always put on full-length pants and T-shirt.

You stay there as an assistant teacher, and almost all of them are muslim, so you should wear proper clothes to go to school. You cannot wear shorts or no sleeves for school.

About the meal you can have in Bandung, you don’t need to worry. They have rice and noodle. You may have meal at the cafeteria in UPI and it may cost around 30000Rp. per one meal. If you want to have lunch or dinner at fancy restaurant, there are some malls around UPI. You can go there by bus and it takes about 10 minutes.

3. About the host institution

Universitas Pendidikan Indonesia is called “UPI”[upi] (not [juːpiːai]). Pendidikan means “education”. Professors and lecturers there have plenty of experience in Japan and they are really kind. They have one professor who graduated from Hiroshima University. In Hiroshima University, there is an officer who is from UPI. Our universities have now strong connection.

Students at UPI are all smart. Some students have JLPT N4 or N5 level even though they are freshmen. After graduation, they will work for Japanese company, be a Japanese teacher, or be a guide for Japanese tourists. Many of them work for Indonesia and Japan as a bridge for both countries. 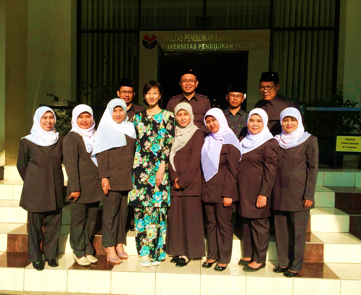 4. About the internship course

At first, this program is for IDEC students, but last year I heard that there is a new project for students from graduate school of Letters and then I applied. The mission of this program is that “as a Letter student, based on our own studies, we tell about Japanese culture and languages”. I belong to the Faculty of Japanese Language Education, and had lectures 9 times (1 lecture * 3 classes * 3 weeks). More than 300 students studying Japanese need native speaker teachers to study and know Japanese language and culture. I tried to have more communication with them.

5. The most impressive experience during the internship

I can make deeper understanding about Japanese language and culture. Even about Japan, I have a lot of things that we cannot explain well.

I can build connections between many people there. Some lecturers gave me a big attention and she took me to go jogging and another professor took me to the mall for souvenir. Some students also took me to many places. The lady who gave me fish and rice for free…. I met many people and felt hospitality there. 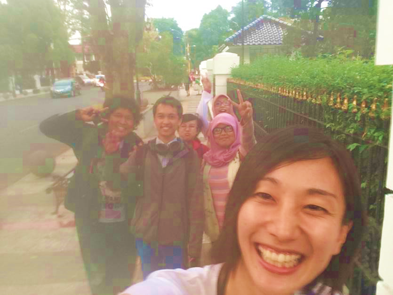 6. Expectations on my internship for the future carrier

At the beginning, I had only interest about Japanese education with no experience. After G.ecbo program, I passed Japanese Language Teaching Competency Test in 2015. Since April 2016, I started to work at Japanese language school as a part-time lecturer. Now I try to do something new and visit UPI again for studying Indonesian language and having my second internship there (with TOBITATE! JAPAN scholarship program). I definitely believe that G.ecbo gave me an opportunity and motivation to move on.

G.ecbo students are well supported by people at UPI. Thus if you can bring something Japanese for them, it will be better. If you walk around alone, you should be able to speak basic Bahasa. During internship, you may be very busy because of unexpected events and sometimes your plan will be cancelled or delayed. You have to have a wide view and strong heart. Never give up what you plan to do. Even though you are behind the schedule, you still can do something else.

I really appreciate help from officers from UPI and HU. Thank G.ecbo for giving me such a special opportunity.

In Indonesia, there are a lot of students who study Japanese language and they like us. You can tell them about “Japan”. Your major can be any fields. They are glad to hear what you do in Japan and it will be their motivation.

I was very glad to know other G.ecbo students (mostly from IDEC). It was interesting to see what they study in their master courses, and what they do in their internship.

If you feel it is interesting, you should apply for this program. Seriously it changed my life :) 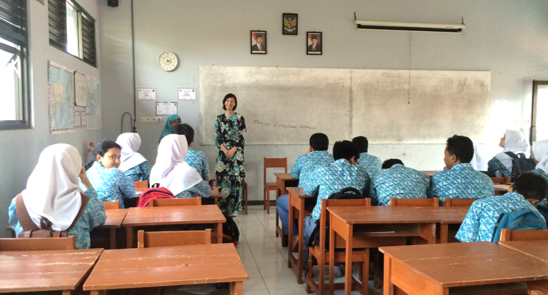