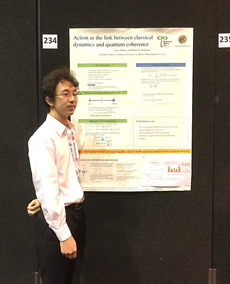 Interned at Centre for Quantum Dynamics, Griffith University (Australia) from October to December in AY2016

As part of my G.ecbo internship for AY2016, I studied abroad at Griffith University’s Centre for Quantum Dynamics, in Australia. Researchers from around the world gather at the centre to carry out research on quantum dynamics from various angles. I participated in this program to introduce the research that I am carrying out now and also with an aim to incorporate a new perspective into my research.

During my stay, I was able to join the research group of Professor Howard Wiseman, the Centre’s head, and participate in the group’s meetings and classes every week. By speaking with other researchers and taking part in the meetings, I was able to hear about research publications explaining new research as well as other famous research publications. Thus I was able to expand my depth of knowledge concerning my own research. At the end of my study, I participated in the Asia Pacific Physics Conference and Australian Institute of Physics Congress (APPC-AIP) and gave a poster presentation introducing my research. I also listened to talks given by Professor Takaaki Kajita, recipient of the Nobel Prize in Physics and others specializing in various fields.

I began job-hunting a few months after finishing my study abroad and I managed to receive a job offer from a company that constructs power plants. The companies that I aimed my job-hunting activities at were all makers of infrastructure and thus not directly connected with my current research. However, I did my job-hunting after having decided that I wanted to do some kind of work that would have an impact on people’s everyday lives.

Of course, the reason for my way of thinking has to do with the exchanges I had with people while I was studying abroad. When I was at Griffith University, the United States presidential elections were held and many people were surprised by the outcome. I had opportunities to discuss it at the research centre and at my dormitory. Many of my fellow classmates were from countries that were not as relatively stable as Japan, and some countries were still experiencing a low standard of public safety and instability. Also some people at my dormitory were doing research in the field of economics and I had the chance to speak with them from that perspective which made it quite interesting for me.

During my job-hunting activities, I had the opportunity to talk about my study abroad and I feel that I received recognition for my stance towards research, my ability to communicate, ability to deal with matters, and ability to take action, all of which were fostered during my experiences with people studying in different fields and from different cultures. Studying abroad has become the norm nowadays. However, during job-hunting activities, rather than something easy to understand such as language ability which can be measured by a TOEIC score, I feel that more value is placed on a person’s experiences, the kind that are difficult to acquire within Japan, and how they think and what kind of action they have taken. For those who are planning to undertake internships, together with research activities (which are the purpose of the internship) and improvement of language ability essential for communication, please place value on things that you can only do in that place and meetings with people you can only meet in that place. I hope you will take this as my personal account of my experience.

Finally I would like to thank everyone at Griffith University, Associate Professor Hofmann  and Assistant Professor Iinuma of Hiroshima University, and also the staff of the G.ecbo and i-ECBO Office for all their help.

－ Advance preparations for an internship

Before I left Japan, I attended a group debate class (Developing Designing Ability) run by IDEC, as preparation for my internship. I researched, prepared and debated a given topic together with international students enrolled in the school.

Through this class I learnt how to give a presentation in English, and show evidence while presenting my argument. I also found out how difficult it is to do group work while complying with the different national characteristics of my fellow students.