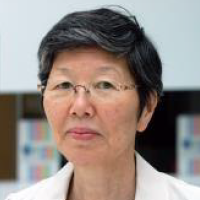 Co-chair of the Board of Directors, Japanese Association for the Advancement of Science
Professor Emeritus, Tohoku University
Former Executive Member, Council for Science, Technology and Innovation (CSTI), Cabinet Office, Japan

Yuko Harayama has contributed to the promotion of science and technology nationally and internationally for a long period of time through working as the Executive Member of the Council for Science, Technology and Innovation, Cabinet Office of Japan after serving as Deputy Director of the Directorate for Science, Technology and Innovation at OECD, as a professor at the Graduate School of Engineering of Tohoku University, and as an assistant professor in the Department of Political Economy at the University of Geneva.

She received the French National Order of the Legion of Honour – Chevalier (Ordre national de la Légion d'honneur-Chevalier) in 2011.