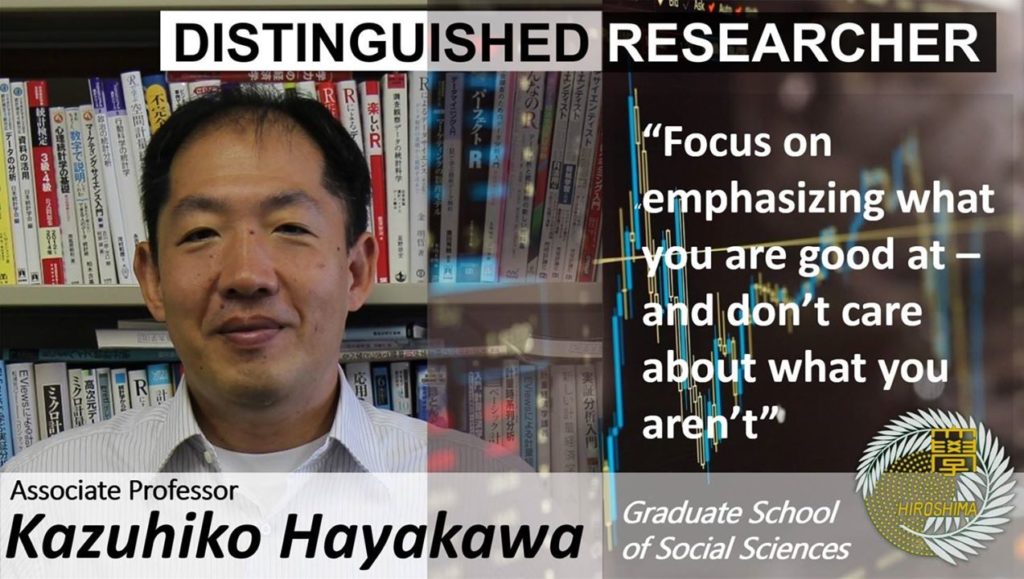 Can you tell me your name and specialist field?

My special name in Kazuhiko Hayakawa. I specialize in econometrics which can be thought of as quantitate economics – I use data to analyze economic activity.

What is its practical purpose?

Together they can provide precise and useful economic data for governments, and companies etcetera. It is often used to develop informed policy. The theoretical side is aimed at providing statistical methods for carrying out research – applied econometrics uses these methods to analyze data.

What is the future outlook for this field?

It has become more important. There has been tendency recently for companies and government bodies to focus on using a quantitative approach. It is essential for the development of useful policies, and the evidence can be used to convince taxpayers etcetera that changes or goals – often financial – are necessary. 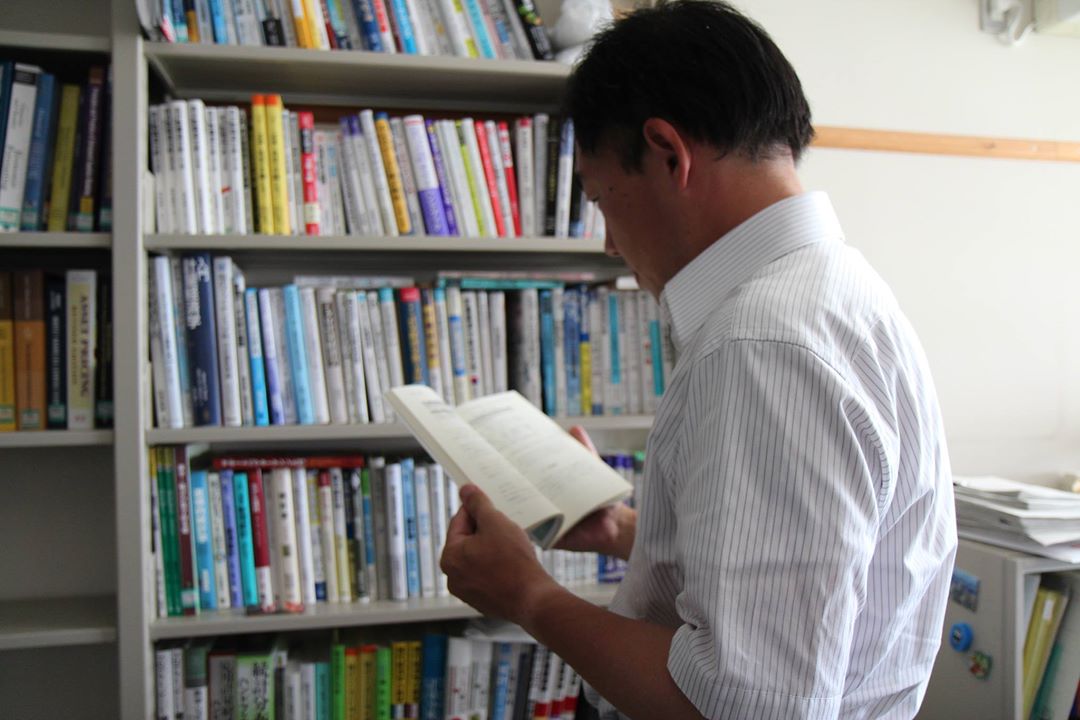 Can you tell me about your background?

I was born in Hiroshima but entered Keio University in Tokyo when I was 18, and spent four years there as an undergraduate student. After that, I worked in industry for two years, at a computer company. I went back to study – to graduate school at Hitotsubashi University, also in Tokyo, where I got my PhD. I spent one year there as a post doc and came to Hiroshima University in 2008. 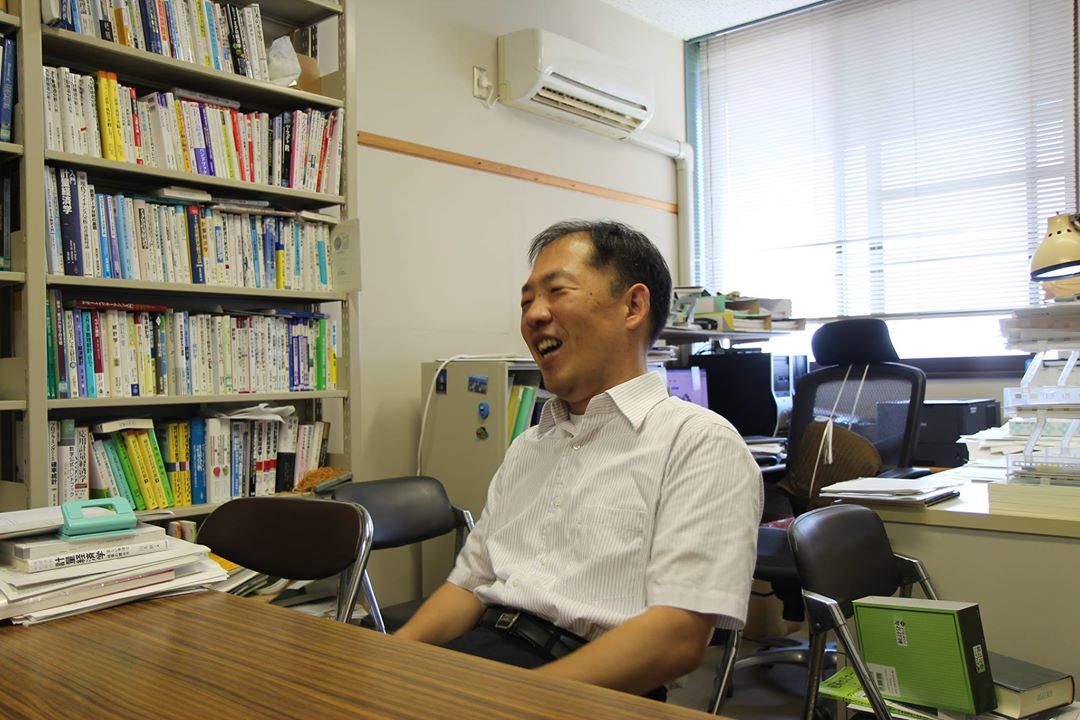 As a child did you dream of becoming an econometrician?!

When I was very young, at elementary school, I didn't like studying and my grades were very – very bad. People who knew me back then could never have imagined I would become a professor at this university!

But, when I was a junior high school student, my best friend was an avid studier. I mimicked him and gradually my grades began to improve. I became interested in mathematics and English. I studied hard and that got me into Keio. Friends can have a big influence on our lives.

What is the best thing about your research work?

What I like most is developing new methods, and considering new approaches, it's interesting. When carrying out research I often use simulations to check the performance numerically. If the simulation results are good, it's exciting – and if the result at the end of the study is good also, it's very satisfying.

What are you most proud of?

When I was a graduate student I had a Eureka moment while attending a seminar with my adviser – I resolved a particular problem in my head. The research that stemmed from that appeared in a good journal, and for it I was awarded a prize at an International conference in New Zealand.

It was about panel data.Panel data has two dimensions – a cross-section and a time series; previously researchers used one or the other.Nowadays panel data is the default type – and it's becoming more important.My research involved the statistical analysis of this panel data, including its dynamics – I developed several statistical methods to analyze this.

I presented the paper at a conference and the committee felt that it was important. As it was an international conference so I felt very proud. That was in 2008 – just before I came here.

What are you working on now?

I'm still working on panel data! The same problem but I'm trying to improve the performance and the modeling approach. So basically, I have been working on the dynamics of panel data for more than 10 years now. 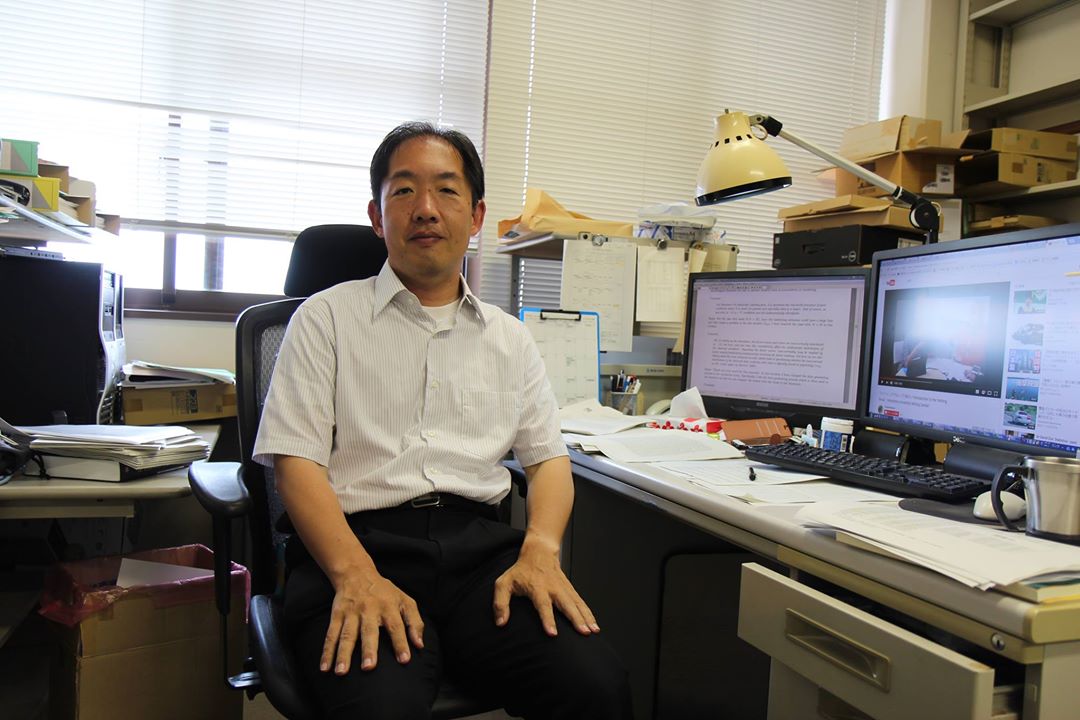 Do you still have the same enthusiasm for it?

What is the best thing about working at Hiroshima University?

I am from Hiroshima so I am familiar with this area. Also, I have no problems here – this environment satisfies me. As part of the Department of Economics I am free to do any research I like – there is a lot of independence.

Is there anything you feel could be improved on?

In economics the salary gap between foreign affiliate and Japanese ones is very large – this is why many of the best Japanese researchers leave to join foreign researcher. You see, in Japan the salary usually depends on age – not on the volume of research carried out When I tell international researchers how it works here they can't believe it!

What are your thoughts on collaboration?

It's important because statistics is a common subject shared by many disciplines – so borrowing ideas from other subjects is important for developing new methods.

For example, recent economic literature mainly on the randomized control trail or RCT – this is an experimental format often used in biostatistics and medicine to evaluate the effectiveness of medication. Medical researchers will conduct experiments by collecting data at random from people in two groups.group is given medicine – and the other is not. The outcomes are compared; if the outcome is similar then the treatment method is ineffective. If the difference is large, it is a successful randomly controlled trial. So, ideas from other disciplines are very important in this field.

Do you have any regrets?

I example not to have regrets – I try to do my best in any given environment. For example, I failed the entrance exam for high school – and for university. At that time, I did get somewhat disappointed, but I gathered myself together and instead tried my best at my studies. It has worked out well for me. 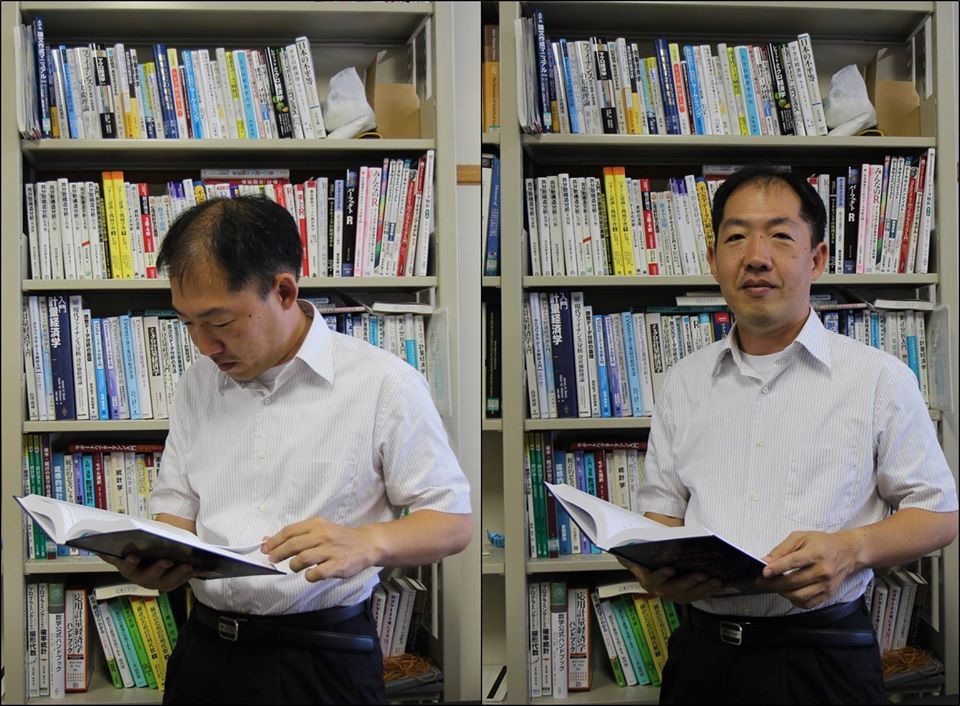 You studied in Cambridge? How was it?

It was a very inspiring time in my life – from 2010–2012. The best part was the professor I worked with there – Hashem Pesaran. He's a bit of a celebrity in econometric circles – famous. Working with him was also beneficial for me, as when people look for him online they see my name beside his on our research paper. It means more people use my name in citations.

Should all students and faculty spend some time at overseas institutions?

Definitely. First of all it's fun – it's a good experience to live abroad because everything is new, so you learn a lot about other cultures. But also, it helps with language. The English we learn in Japan is very different from "real" English. A student might have a good TOEIC score, but have difficulty in communicating when they go abroad.

Did you travel much when in the UK?

Ah yes, I went to Oxford and York – where I have several coauthors, and also Cardiff, and the Cotswolds.

What advice do you have for today's students?

When not in the office how do you spend your time?

Because I have three children, I spend my weekends looking after them. Otherwise, I am always in this office or teaching.

Well, I also enjoy fishing at the coast but I don't have much time to go. Maybe a few times a year – but my son is very young so it's a little dangerous for the foreseeable future!

Can you describe your daily work style?

Usually I come to the office at 8am, and I leave at 8pm – I have been doing this for over five years now so I don't mind it at all.

What's the next big thing in econometrics?

I think data analysis will always be important – big data is data collected by governments or companies. Recently some econometricians have been attempting to develop artificial intelligence – machines that can learn new techniques for analyzing economic data. Big data with many different variables is now one of the most important topics. It is evolving fast.

Some people think that too much data mining by government agencies and companies is intrusive on their privacy; what do you think?

Balance should important. We should only collect data on issues people consider important.

What will you be doing in five years from now?

I will continue my research but widen the scope. I will still be in Hiroshima but if I have a chance, I would like to work abroad again for research.

Find out more about Associate Professor Kazuhiko Hayakawa and how to contact him here: https://www.hiroshima-u.ac.jp/en/g_econ/research/hayakawa