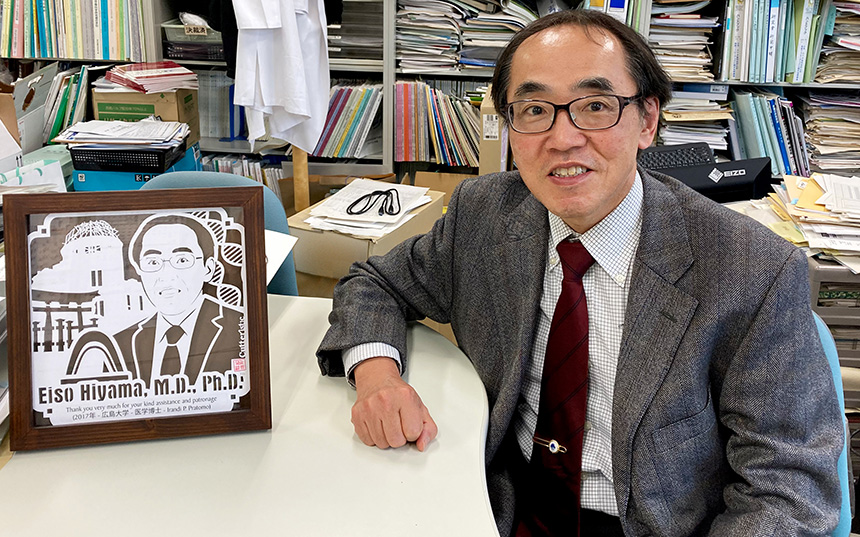 I am a pediatric surgeon; I conduct my research on pediatric cancer alongside my front-line clinical work in the hospital. Cancer progresses very swiftly in children, and fatalities are not uncommon. Even when treatment is successful, the cancer recurs in some people. And yet, some tumors disappear naturally. I got involved in pediatric cancer research to try and unlock the mystery of this apparent contradiction.

When I first entered the medical community around 30 years ago, it was thought that telomeres, the protective caps on the end of chromosomes, dictated the lifespan of the cells. Telomeres are made up of repeated sequences of four nucleotides. The protective end section (telomere) of each new cell strand gets shorter and shorter as chromosomes are replicated and the cell divides. Finally, telomere runs out and the cell dies. Even among cancer cells—which are "immortal" and continue reproducing infinitely—some cells become unable to divide and eventually disappear. Researchers began to think that the telomere was what determined those cells' fate.

When I started my research, it was a time when it was becoming clear that there were genes that caused or suppressed cancer. Some researchers wondered what we were going to do by examining the ends of chromosomes, but one stance in research is to do what no one else is doing. The results showed that the cured patients had very short telomeres, and the patients who were not cured had very long ones. 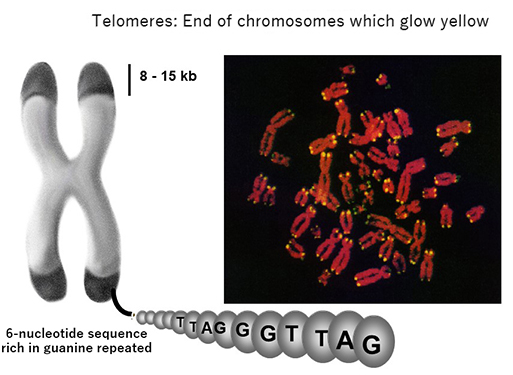 Telomeres glow yellow on the end of chromosomes.

Conversely, we knew about telomerase, an enzyme that lengthens telomeres, but it was long believed that telomerase did not exist in humans. Once it became known that human cells could, in fact, contain telomerase, I hypothesized that telomerase was involved with the cancer cell telomeres. There was no means of measuring telomerase in Japan at that time, but I learned that a Canadian researcher had successfully done so in protozoa. Then, in April 1994, I heard that he had launched a start-up venture and was scheduled to address an academic conference. I leapt at the opportunity to meet him, and upon doing so, was astounded to learn that he was, in fact, just about to announce his successful development of a method of measuring telomerase in humans. One thing led to another and two months later I was on my way to study at the Jerry W. Shay laboratory at University of Texas Southwestern Medical Center, where he was involved in joint research.

I learned in Texas that patients whose tumors disappeared on their own had no telomerase activity, and that telomerase was very active in those who died quickly. When doing those experiments, I tested my own blood cells for comparison, and found telomerase activity. It was a terrible shock, and I decided to test my wife, who was also a doctor. She, too, showed signs of telomerase activity. This led to the discovery that there was at least some telomerase activity in healthy human cells. Theses issues were later published in Nature, including some peer reviewed by Dr. James Watson, who won the Nobel Prize in Physiology or Medicine for his discovery of DNA's double helix structure. 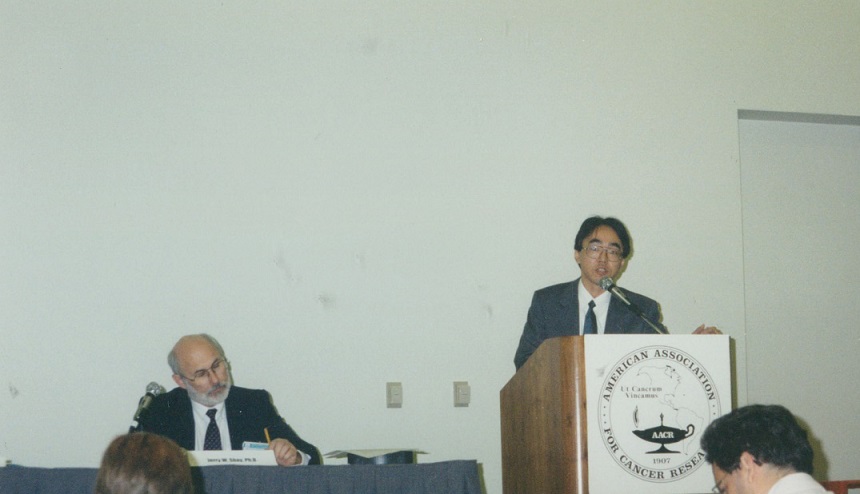 Prof. Hiyama spoke to the media at an American Association for Cancer Research conference in 1997, where he had presented on the utility of telomerase activity in pancreatic fluid in diagnosing pancreatic cancer.

Nowadays, it is commonly known in oncology that tumors without telomerase disappear on their own, while those with active telomerase tend to see growing telomeres and become malignant. Today, my research bridges the gap between fundamental research and clinical application in the quest to develop drugs that target telomerase. Once we know the mechanism for controlling telomerase, we should be able to control cancer cells by identifying and removing whatever protein functions to activate telomerase.

I am also involved in a joint international clinical study and trials focused on liver cancer in children. There is no shortage of adult liver cancer patients to study, but in children it is rare—here at Hiroshima University, only one or two cases a year—so for a long time we were unable to mount a proper clinical trial. To overcome this, we began by forming a network of around 70 institutions nationwide in 1989, and in 2005 Hiroshima University became the host institution for the Japanese Study Group for Pediatric Liver Tumor. Still the sample was small—only around a hundred cases per year nationwide—so around 2012 we set up a framework for joint research with institutions in Europe and the US and we have been working on clinical studies globally since 2017.

In the future, I would like to see more proactive engagement with places like China, South Korea, and elsewhere in Asia because the efficacy and side-effects of drugs varies among different ethnicities. When the sample size is limited, as in this case, there is a trend for some groups to be left behind so I am hoping our project can be an example of how to improve treatment outcomes.

Technologies are evolving at an incredible pace in the field of pediatric cancer, and whereas the mortality rate was around 80 percent when I first became a doctor, now around 80 percent of patients can expect to live. That sounds impressive—and it is—but it still means that 20 percent of children with cancer die. Even if we can prolong life with chemotherapy, they do not make it to adulthood. An extra five years of life might be a happy gain for, say, an elderly person who develops cancer, but in the case of a five-year-old, an extra five years still means the child dies at ten—a bleakly sad prospect whichever way you look at it. We must strive to cure cancer in children rather than simply buying more time for patients. My goal is to reduce the mortality rate of children due to cancer to zero, so that all child cancer patients can live into and beyond adulthood and say, "I'm so glad to be alive." 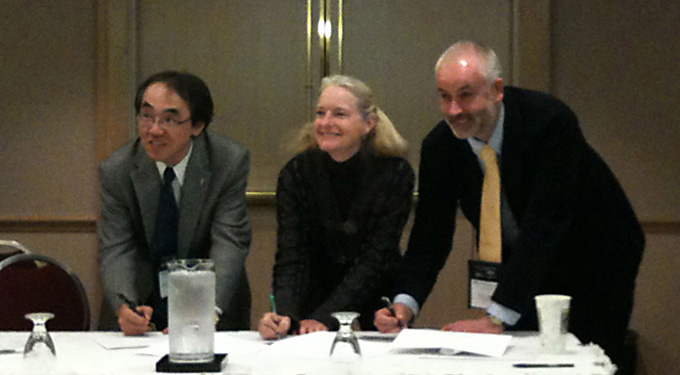 Prof. Hiyama signs an agreement in Los Angeles in 2011 on joint research on liver cancer in children with the heads of the US (center) and European delegations (right).

For more information on Professor Eiso Hiyama's career and research achievements, please see the Profiles of Faculty and Research Scholars.