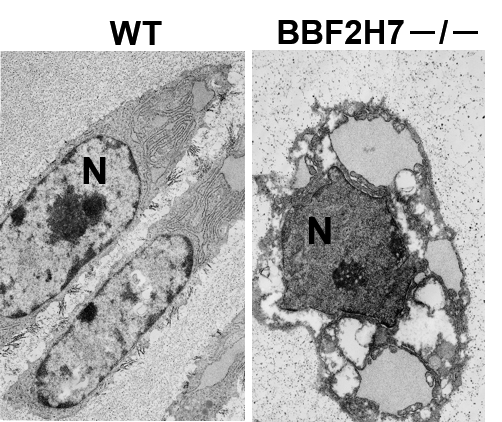 Problems in the signaling pathway that controls the synthesis of proteins and lipids by the endoplasmic reticulum (ER) can cause dramatic problems in cells throughout the body. The pictured cells are chondrocytes, cells that create and secrete the matrix proteins that form cartilage. The left-side image contains normal chondrocytes and the right-side image contains a chondrocyte that lacks the BBF2H7 gene. The nuclei in the cells are labeled “N” in both images. In the normal chondrocytes (left-side image), the thin squiggles surrounding the nucleus (N) are healthy endoplasmic reticulum (ER). Without the BBF2H7 gene, the ER in the right-side image is abnormally expanded and includes many secreted proteins. A similar image was originally published as Figure 2 of a research paper with the following citation information: Saito et al. Regulation of endoplasmic reticulum stress response by a BBF2H7-mediated Sec23a pathway is essential for chondrogenesis. Nature Cell Biology, 11: 1197-1204, 2009. doi:10.1038/ncb1962

Inside the cells of animals and plants is a folded, flattened tube of membranes piled on top of themselves. Studded along portions of the inside of this tube are ribosomes, small organelles that turn messages from DNA into protein. The proteins and occasionally important fats, or lipids, travel through the tube, folded and finalized into their completed form as they go. The tube itself is the Endoplasmic Reticulum, referred to as “the ER” by scientists. If something goes awry within the ER, proteins and lipids can get backed-up, clogging the tube and causing cellular stress. Both the potential causes and effects of ER stress are numerous and include cancer, neurological diseases like Alzheimer’s, metabolic diseases like diabetes, and bone diseases like osteoporosis.

Studying the processes that cause the build-up of proteins or lipids and the downstream effects is the research subject of Distinguished Professor Kazunori Imaizumi. Currently, Imaizumi works at Hiroshima University in a research lab in the urban campus in Hiroshima city as part of the Department of Biochemistry. The diversity of current research topics within his laboratory seem like enough for multiple university departments, but the common cause within every project is the ER.

“There are many, many diseases we can study by looking at the same problems in the ER,” explains Imaizumi.

When he was living in Miyazaki, he enjoyed what he refers to as the “everyday vacation lifestyle.” He returns to the area often to visit research collaborators and Imaizumi says his colleague enjoys surfing, but his personal preference is to visit the golf course.

Now, Imaizumi enjoys many collaborations with his Hiroshima University colleagues. 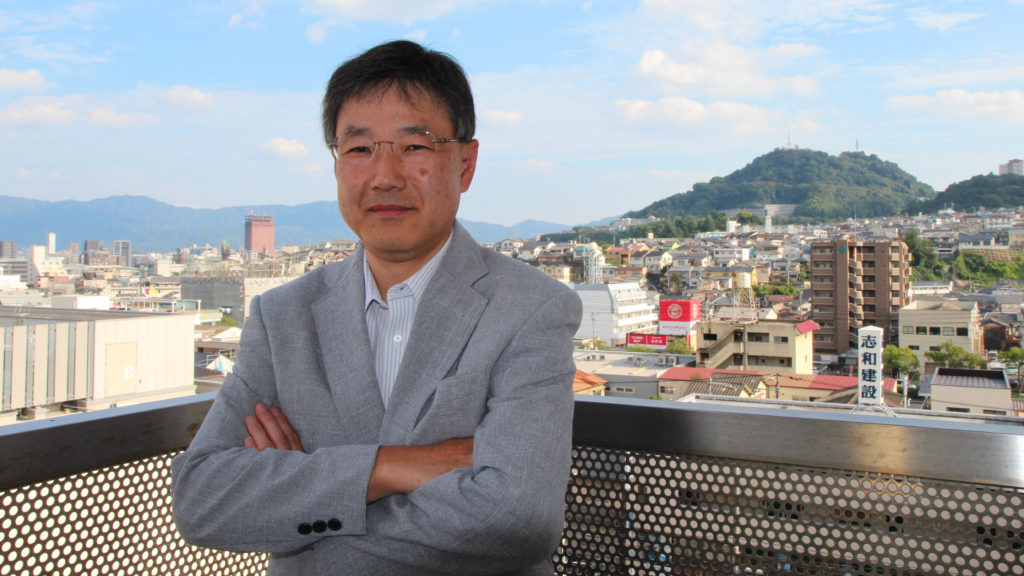 Distinguished Professor Kazunori Imaizumi stands on a balcony on the Kasumi campus of Hiroshima University, overlooking Hiroshima city. The professor has previously worked at other organizations in Osaka, Nara, and Miyazaki.

“I know about five other researchers in Hiroshima University who also do projects involving the ER, and I know they are doing excellent and unique experiments. Indeed, we even had success applying or grant funding together. These collaborations bring all of us many merits.”

Sometimes administrative requirements can be regarded as an unfortunate distraction from the laboratory, but Imaizumi finds positive aspects within every task.

“Writing grant applications and managing scientific societies is hard work and it deprives me of time for research. However, it is very important work to contribute to these societies. This is the way we must bring up young investigators in our research field, so I do not dislike the hard work.”

Imaizumi’s dedication to young researchers may stem from the intensity of his personal PhD experience, which he still describes with deep emotion.

“For two years, every day, I searched for the genes that caused cell death in neurons. I found nothing. I felt maybe I should give up the project. But, finally, finally, I was in the dark room, checking my experiment, and I saw the result. I found one gene that apoptotic neuronal cells expressed but normal neuronal cells did not express. This was my one candidate. I felt at that time that the hard work paid off, and it was good that I believed in the research project. I was so excited! I had tears from my eyes in that dark room.” 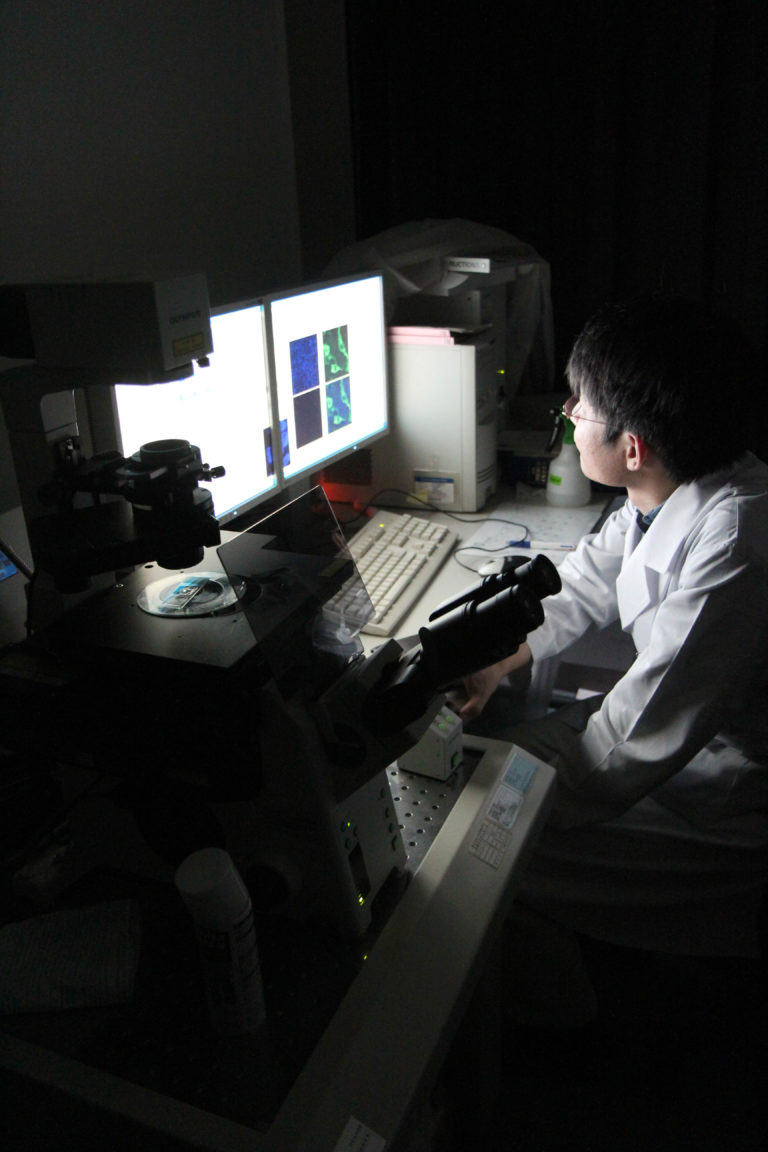 An Assistant Professor examines neuronal cells using a fluorescent microscope in the research laboratory of Distinguished Professor Kazunori Imaizumi at Hiroshima University in the Department of Biochemistry. Studies like these are part of ongoing research on the endoplasmic reticulum stress response and its role in neurological and bone diseases as well as cancer.

“I tell young investigators that it is so significant that they have a mindset to never give up. Never, for a long, long time,” says Imaizumi, emphasizing the length of time.

Imaizumi’s multiple former PhD students are now in academia or industry, and he currently has five PhD students studying in his laboratory, three of whom are from overseas.

“Twenty years ago, being a specialist in one research area was OK. Now, it is important for researchers to have interdisciplinary skillsets.”

Imaizumi’s own career involved collecting a variety of scientific skills that have made the wide variety of his current research interests possible.

Imaizumi attributes portions of a project involving a genetically modified mouse to his background in toxicity and pathology, which he can now combine with his expertise in molecular biology and cell biology.

“Without my knowledge of pathology, we could not do these histology studies,” he says, pointing towards microscopy slide images of thin sections of mouse bone.

In 1995, he named that gene “death protein 5, DP5” in a paper published in the Journal of Biological Chemistry. Since then, Imaizumi’s research projects have moved on to other tissue-specific genes related to cell death due to ER stress.

Imaizumi originally earned a Master’s degree in veterinary pathology at Tokyo University of Agriculture and Technology in 1985 and then worked for three years at a pharmaceutical company, testing the toxicity of different chemical compounds. The transition to begin work on a PhD at Osaka University came with a shift in topic to neurobiology. The PhD research focused on neuronal cell death during neurodegenerative diseases, like Alzheimer’s and Parkinson’s. During this project, Imaizumi began exploring ER stress as a potential cause of the neuronal cell death. The possibility that the ER could become stressed and then cause cell death was new for scientists at the time.

“I was very impacted by this idea. Now, for 20 years or more I have focused on ER stress!” remarks Imaizumi. The implications of ER stress are now an area of active research for many scientists. 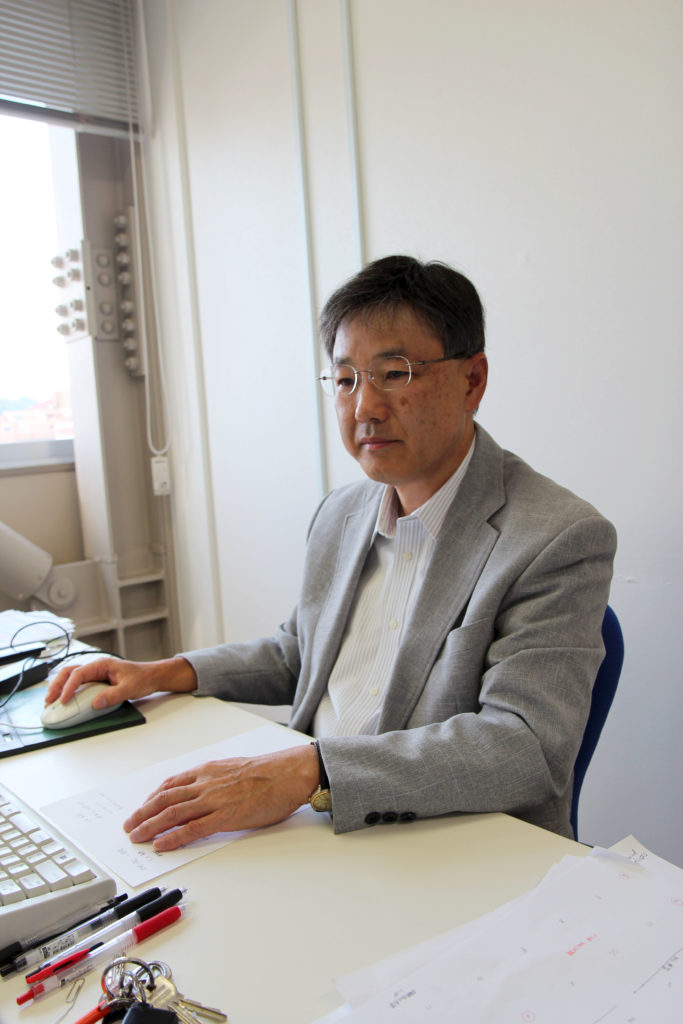 Distinguished Professor Kazunori Imaizumi has mentored many PhD students throughout his career who have gone on to successful careers in academia or industry. The professor believes that encouraging students to develop skills in multiple types of scientific expertise not only gives them better career prospects, but allows them to do more innovative research.

“Ten years ago, a society for the study of ER stress started with about ten researchers. Now there are between 50 and 100 researchers at our annual meeting. We can even say ER stress is a hot topic because the scientist who identified ER stress response-related molecules 25 years ago was a potential candidate for the 2016 Nobel Prize,” says Imaizumi, referring to Dr. Kazutoshi Mori of Kyoto University.

Although stress is colloquially recognized as a negative event and it can lead to cell death, mild ER stress is a necessity for healthy embryonic development in most organisms. Mild ER stress can stimulate bone and cartilage growth and activate certain genes to stimulate the differentiation of immature cells.

Imaizumi’s laboratory patented a genetically modified mouse in 2013. The mice lack a gene called oasis, and are born with much of the abnormal joint and bone characteristics of human bone disorders like osteoporosis, common in the elderly. Work is still ongoing, but the mouse is being used as a model of osteoporosis.

Histological staining (left) and 3D X-ray images (right) of mouse bone used in Distinguished Professor Kazunori Imaizumi’s research. OASIS KO images are of mice lacking the OASIS gene. The deteriorated bones of the OASIS KO mice are caused by disturbances in the differentiation of osteoblasts (bone-forming cells) due to the lack of OASIS signaling. The endoplasmic reticulum synthesizes and processes the proteins and fats required for healthy cell growth. Similar versions of these images were originally published in: Murakami et al., Nature Cell Biology, 11: 1205-1211, 2009

“We cannot yet find direct evidence of ER stress leading to osteoporosis, but there is a link between a gene known to cause osteogenesis imperfecta, a genetic disease that causes easily broken bones in children, and experimental evidence that deleting the gene causes ER stress.”

Despite the diversity of these research projects, Imaizumi says that his singular vision is to one day develop a compound to regulate ER stress and work as a therapy for all the various diseases connected to ER stress. Until then, his efforts to map all the signaling pathways involved will continue.

Distinguished Professor Kazunori Imaizumi’s laboratory website, including a bibliography of his research publications, is available in English and Japanese here (http://home.hiroshima-u.ac.jp/imaizumi/index-e.html).