Katusya Inoue identifies himself as a chemist, but his work blends scientific concepts that were once completely disparate. This combination of research fields was something his 20-year-old-self hoped for, but never expected. 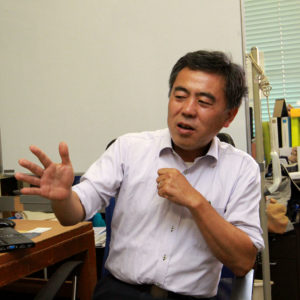 The major research themes of Inoue’s work include magnetism and chirality. His work blends chemistry and physics to investigate the properties of unique molecules down to the level of individual electrons.

He is currently a Distinguished Professor in Hiroshima University’s Graduate School of Science where he studies the properties of molecules that are both chiral and magnetic. Inoue downplays the special nature of the work that happens in his laboratory, introducing the space by saying, “This is a normal organic chemistry lab.”

While a Master’s degree student at the University of Tokyo, he studied molecular magnets, which are usually made using organic, or non-metal, materials. Certain organic materials can also have the special property of being chiral, meaning the molecule can come in mirror image versions, like human hands: identical, but non-superimposable. In the late 1980s, no researchers had combined the fields of organic chiral molecules with organic magnetic molecules.

“At that time, magnetism and chirality were totally different areas in science. So, I had to choose only one topic. In my undergraduate degree I chose magnetism. When I started my Master’s degree, I explored other laboratories and thought about changing my field. I spoke to Professor Ryoji Noyori at Nagoya University. He was the big boss of chiral organic synthesis. He told me, ‘You must come to our research group.’ This was a very difficult decision for me, but I decided to stay at the University of Tokyo.” 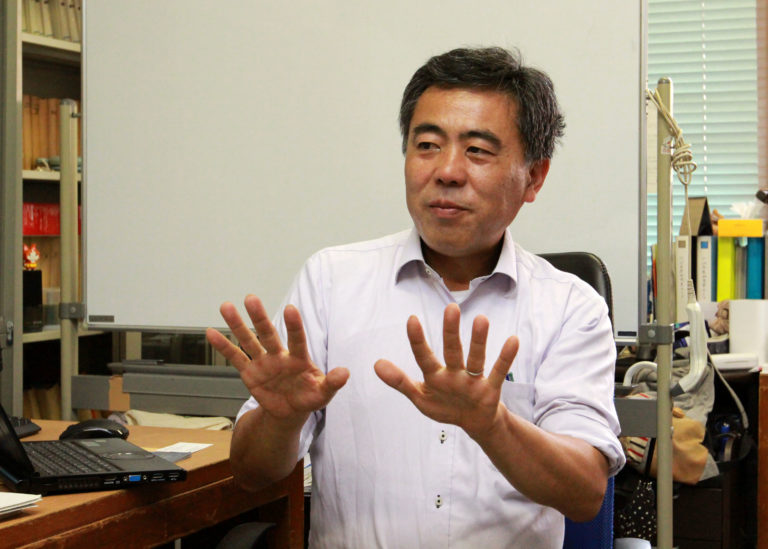 Inoue explains the science of chirality, which describes molecules that can come in “right and left hand” versions. Sometimes the different versions of the molecule, which have the exact same combination of atoms, will have vastly different chemical properties that influence their medical or industrial applications.

Noyori later won the Nobel Prize in Chemistry in 2001 for his work on chiral molecules, and Inoue completed his PhD research in 1993 on magnetism in organic molecules.

“The ideas almost disappeared. But, very deep inside, I kept my interests about chirality,” says Inoue.

After earning his PhD, Inoue accepted a position as a faculty member at the Okazaki National Institutes, located near Nagoya. (This Institute became part of the National Institute of Natural Sciences in 2004.) While there, he expanded his research to include multifunctional magnets, the study of materials that are magnetic and possess an electric field inside the material simultaneously.

“I am asking, ‘What can we do to generate an electric field inside magnets?’ The answer of this question is to use the structure of a chiral magnet.  In 1999, nobody was studying chiral magnets.  Now, in the first 8 months of 2016, there are more than 500 papers published on these topics. It is very huge!” he says, revealing his awe at how the field has grown.

Inoue’s work also expanded due to a fateful conversation with another professor at the Institute.

“We knew each other quite well, but we were only after-work-drinking friends, not professional co-workers. But, he was leaving. In 2002, on the last night he was at work, we decided we should explain our research fields to each other. The theoretical physics he studied is very, very far from the chiral materials I worked on. But he was intrigued by my topic. He moved to Kyushu Institute of Technology and only then did we start our professional collaborations.”

Eventually, Inoue also transferred to a new position, becoming a Professor at Hiroshima University at the end of 2004.

“I had stayed at my previous job for 10 years. It was very nice, but I wanted to change my atmosphere.”

In 2005, the collaborations with his theoretical physicist friend led to co-authorship of a research paper that they published in the journal “Progress of Theoretical Physics Supplement”, which Inoue credits with stimulating the start of the field of chiral magnetism. Finally, he had combined his dual interests in chirality and magnetism.

“Designing new materials to control chirality – making choices about using magnetic or nonmagnetic, metallic or nonmetallic materials– this is the best part of an experiment. You are thinking about how to put atoms together and building things that have never existed before.”

“When we published in 2005, chiral magnets were brand new. Now, around the world there are about 50 different research groups who study these topics full-time,” says Inoue.

Inoue has often worked in those international laboratories through a variety of different overseas sabbaticals to different universities abroad. 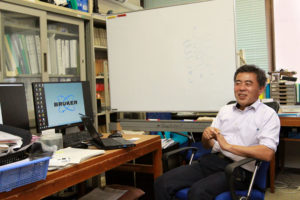 Inoue has been a member of Hiroshima University since 2004. His career has included multiple overseas sabbaticals and research collaborations.

In addition to his early publications from 1999 and 2005, a result Inoue is excited to discuss is a result gathered in Scotland in 2011 using the advanced Lorentz Transmission Electron Microscopy equipment available at the University of Glasgow. These microscopes can take pictures of magnetic domains that are so “zoomed-in” that researchers can interpret the direction of an electron’s spin.

“We were very surprised when we could directly observe spin structure of our chiral magnet.  And the spin structure was robust, very stable!  We measured a 20-micron sample.  That is a huge size on the scale of quantum space, looking at individual electrons.  But all the spins were aligned.  The stability allows us to consider many new properties of these chiral magnets, like magnetic resonance or resistance, or optical properties.”

Inoue predicts that the recent advances in understanding chiral molecules will lead to applications including one-way transparent materials and alternative ways of transmitting information within computer processors. Rather than electrical signals, future computers could send magnetic signals based on the “left or right hand” versions of magnetic chirality.

Inoue replies without hesitation when asked if the applications of chiral magnetic materials could diversify or increase if researchers combine other seemingly isolated scientific fields, as chirality and magnetism once were.

The full citation of the paper that Distinguished Professor Katsuya Inoue credits with stimulating the field of chiral magnetism is:
Kumagai H, Inoue K. A chiral molecular based metamagnet prepared from manganese ions and a chiral triplet organic radical as a bridging ligand. Angewandte Chemie-International Edition, 38, 11, 1601-1603, 1999.