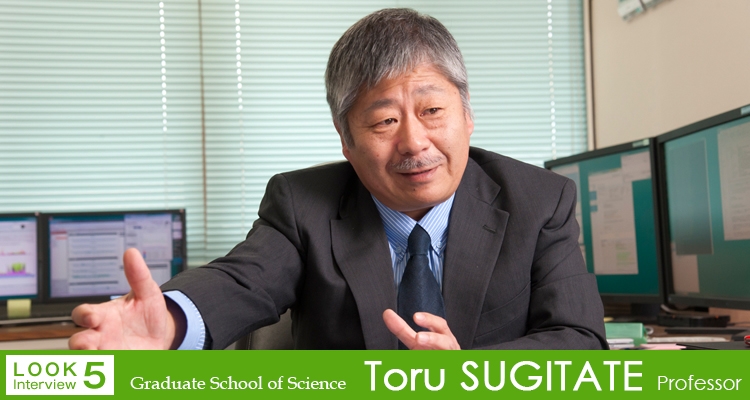 Reproduction on Earth Immediately after The Big Bang: Leading Cutting-Edge Research to Unravel Universal Mysteries to Mankind in The Field of Nuclear Physics

Leading the Japan team in experiments through nuclear collisions to shed further light on the properties of the state of quark matter. 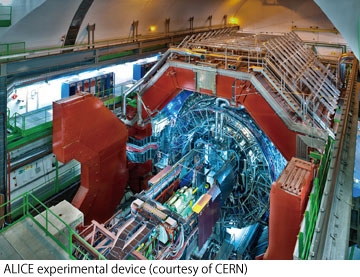 Our research, which has been ongoing for approximately 30 years, is "empirical exploration of the high temperature quark matter (quark-gluon plasma) through the world's highest energy nuclear collision." In other words, our research focuses on "understanding the hottest (1013 oC), heaviest (1013 kg/cc) matter on earth." Cosmology based on elementary particles theory indicates that the universe began from a single point 13.7 billion years ago.
We know that immediately after the Big Bang, which is the basis of elemental particles theory, this matter filled the universe in one one-millionth of a second. We want to understand how the universe came to be by reproducing and examining in detail that event in a laboratory. This objective is the focus of our research. However, this type of experiment requires a huge facility; therefore, around 1984, experimental research in this field was expanded at the Brookhaven National Laboratory in the United States and at the European Council for Nuclear Research (known as CERN) in Europe. Our lab constructed an international cooperative research system in collaboration with researchers from around the world, and with that system, we are constantly moving forward with the world's most advanced research. 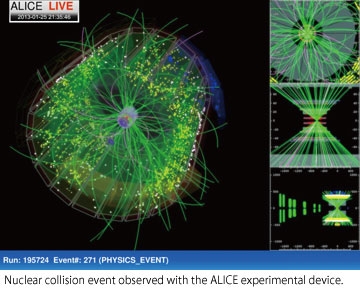 Currently, we are participating in an experiment called a large ion collider experiment (ALICE) using the large hadron collider particle accelerator at CERN. ALICE is a large-scale international joint experiment involving 35 nations and 120 research institutes, and I am serving as the head of the group from Japan that includes researchers from Hiroshima University, the University of Tsukuba, and the University of Tokyo.

Collaboration between such a large group of researchers is also proof that the quark matter that we are handling is one of the mysteries that researchers involved in today's fundamental science would like to unravel.

Research to draw near to "our universe," which is a universal mystery to mankind. Joy in working with people around the world, engaging in competition, and fostering researchers.

This type of fundamental science is not directly useful for anything; however, it provides valuable information necessary for understanding nature. In this research, we want to unravel things that are mysteries to everyone, and more specifically, we want to unravel universe, which is a universal mystery to mankind. We "share a curiosity with people around the world" and focus on "solving the mysteries of nature." I think this is the significance of the existence of natural science as a field of study.

In addition, although researchers around the world are targeting the same goal and working collaboratively to advance research, fierce competition also exists amongst researchers. Scientists are intrinsically competitive, and this competitive spirit serves as the motivating force behind scientific advancements. In addition, since society seeks this type of international competitiveness, graduate students, young researchers, and others are being trained and fostered. Of course, the significance of research being conducted at universities lies in this area, and I have thus far found that as the students we guide are encouraged by external researchers, they feel tremendous joy.

For a future research, we want to conduct challenging experiments at an even higher level while improving particle accelerators by doubling their energy and increasing their power.

Ultimate goal to complete the scenario of universe origin. Desire to discover one of the keys to unravel that mystery. 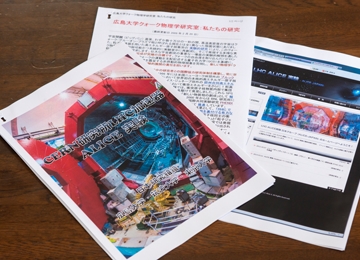 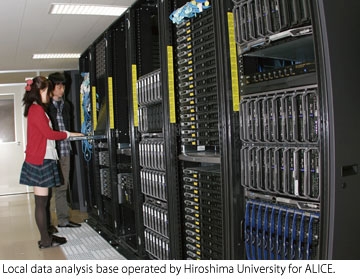 Our most desirable research result is to understand the current universe with the scenario that we have created. In fact, our ultimate goal is to understand how the universe came to be and what occurred at that time, and to complete the scenario. However, this pursuit is also related to Higgs particles or, more specifically, to the theory of elementary particles and to cosmology; therefore, the final scenario cannot be formulated without gathering various results. Thus, we have a strong desire to create one of the keys needed to unravel this scenario and to then open the locked box.

As members of the university, our theme moving forward will be to determine how to incorporate this research into higher education at Hiroshima University. I want to consider the educational system of the graduate school with a broader perspective and increase the significance of Hiroshima University as a research university; raising the profile of their institution may be the ultimate goal for any person conducting research at the university. 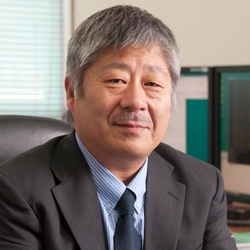