Hiroshima University concludes an inter-university agreement with the University of Malawi, Chancellor College

The Graduate School for International Development and Cooperation (IDEC), Hiroshima University has rich experiences and knowledge in research of education development in developing countries. Particularly in Africa, IDEC has dispatched their students as the Japan Overseas Cooperation Volunteers to Zambia since 2002 and held a number of joint seminars with the University of Zambia as part of academic guidance and counseling to IDEC students every year since 2007.

At the action research dissemination seminar as an accomplishment of the project activity (※ 2), the signing ceremony was held in the presence of Prof. Samson Sajido, vice principal, the Chancellor College, the University of Malawi, and Professor Kinya Shimizu, IDEC, Hiroshima University and they exchanged the agreement. 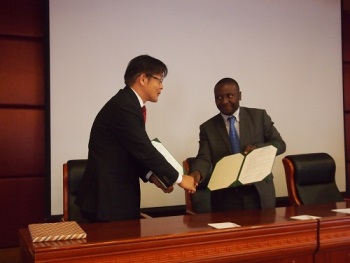 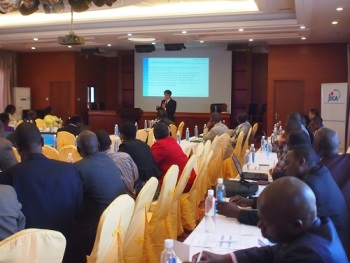 ※1 Zambia Education Program : A program to acquire master's degree in IDEC, Hiroshima University while teaching science and mathematics as the Japan Overseas Cooperation Volunteers to Zambia. The details from the following links.