[Research] New genetic cause of gastric and prostate cancer identified

Researchers at Hiroshima University have opened the door to finding a new class of cancer-causing genetic variations.

Using a combination of pre-existing electronic databases and their own experiments with cancerous and healthy cells, researchers linked stomach (gastric) and prostate cancer to a specific type of DNA called transcribed-ultraconserved regions (T-UCRs). This approach will likely reveal more links between T-UCRs and other cancers in the future.

Modern research studies, like this one led by Professor Wataru Yasui, the Dean of the Institute and Graduate School of Biomedical & Health Sciences at Hiroshima University, are enhancing traditional understandings of cancer genetics.

The human genome is made of lots of DNA, but only some of that DNA forms the genes that become the proteins that make up our bodies. When the human genome was first mapped, sometimes DNA that wasn't part of a gene was referred to as "junk DNA." However, scientists soon realized that DNA that is not part of a gene is often important for controlling how genes make proteins inside the cell.

One type of DNA important for controlling genes is called a Transcribed-Ultra Conserved Region (T-UCR). These stretches of DNA are believed to be extremely important for gene regulation because all 481 of them are identical in humans, mice, and rats. This evolutionary conservation often indicates that the DNA has an essential function.

Based on previous research, Prof. Yasui's team chose to focus on certain T-UCRs already believed to be important for either stomach (gastric) or prostate cancer. They measured how cancer cells grew in a dish after drug treatments. Based on their knowledge of how the drugs work inside the cell and their careful observations of how the cells behaved, the scientists could deduce how the T-UCRs influence cancer growth. More interestingly, the research team could also begin to understand how the T-UCRs themselves are controlled by other parts of DNA.

Several T-UCRs are regulated by the number of extra chemical groups attached to specific points of other DNA called promoter regions. The presence of these groups on DNA forms a code referred to as epigenetic methylation. Too much methylation on the promoter regions that control the T-UCRs means the T-UCRs are unable to control the excessive cell growth that causes cancer.

Prof. Yasui's team identified multiple T-UCRs controlled by the epigenetic methylation of their promoter regions. One of those T-UCRs, called Uc.158+A, had never before been described by any cancer scientists.

However, the researchers also found one T-UCR, called Uc.416+A, that was not affected by drugs that alter epigenetic methylation, hinting at a different style of regulation. Prof. Yasui's team then searched through two different electronic databases and found another molecule that they predicted would interact with Uc.416+A.

After another set of cellular experiments, the researchers discovered relationships between Uc.416+A and multiple other molecules inside the cell. Understanding how these molecules and Uc.416+A influence each other allowed Prof. Yasui's team to identify a potential regulatory pathway of stomach (gastric) cancer. Two of those molecules are already known by cancer scientists to be important in controlling how fast cells multiply. However, Hiroshima University researchers are the first to connect Uc.416+A to this regulatory pathway.

Applying the approach of searching multiple scientific databases and performing cellular experiments should allow researchers to identify T-UCRs relevant in other cancers and will hopefully lead to increased cancer therapies and preventions. Prof. Yasui plans to continue this work at Hiroshima University and his team is currently investigating methods for measuring T-UCR levels in blood samples as a potential future cancer diagnostic test. 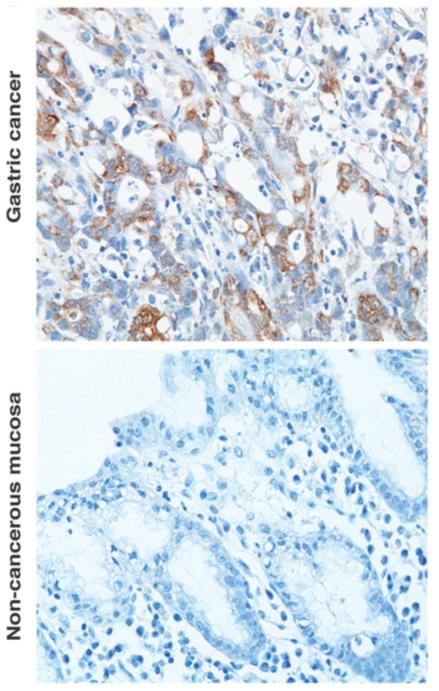 [Caption]Dark blue color represents the center of each cell. Brown-red color shows Uc.416+A. The top panel shows cancerous stomach cells with high levels of Uc.416+A, but none is detected in healthy cells in the bottom panel.
[Credit] Photo by Goto K in 2015 at Department of Molecular Pathology of Hiroshima University

This work was supported, in part, by grants-in-aid for Cancer Research from the Ministry of Education, Culture, Science, Sports and Technology of Japan, and, in part, by a grant-in-aid for the Third Comprehensive 10-Year Strategy for Cancer Control from the Ministry of Health, Labor and Welfare of Japan, by the National Institute of Biomedical Innovation (Program for Promotion of Fundamental Studies in Health Sciences), and by the National Cancer Center Research and Development Fund.

Link to the article