Japanese tadpoles can live and grow in natural hots springs, or onsen, with water temperatures as high as 46.1oC (115oF). Living in onsen may benefit the tadpoles’ immune systems, speed their growth, and allow the tadpoles to survive on small volcanic islands where there are few other natural sources of fresh water.

Tadpoles of the same frogs were previously found living in hot springs in Taiwan and other Japanese islands, but this field study found tadpoles living in the hottest ever recorded temperatures for any amphibian tadpole. The research was completed by scientists at Hiroshima University with collaborators at SOKENDAI, The Graduate University for Advanced Studies.

Japan’s onsen attract locals and visitors to relax in the hot water year round in bathhouses built to contain the water in public tubs. The onsen where researchers found the tadpoles were shallow mud pools in the forests of the small, subtropical island of Kuchinoshima, approximately 310 kilometers (192 miles) due South of Nagasaki in the East China Sea.

“Scientists have studied the distributions of organisms and their environmental adaptations since the era of Darwin and Wallace. Our report is one of the best examples of a direct connection between an animal’s physical ability to tolerate diverse environmental conditions and the animal’s success at colonizing diverse geographic areas,” said Takeshi Igawa, Ph.D., Assistant Professor at Hiroshima University and last author of the current study.

The tadpoles are Japanese stream tree frogs, known to scientists as Buergeria japonica. Japanese stream tree frogs are the only native species of amphibian on the Tokara Archipelago, a chain of volcanic islands off the Southwest coast of Japan. The adaptation to survive in water too warm for other amphibians may have allowed these frogs to exploit new habitats and avoid competition from other species. Future research will focus on the details of the tadpoles’ behavior in their habitat.

“I noticed tadpoles in the Seranma onsen during a field trip in June 2013, so we went back to the same place in September 2015 to study them. Our goal is to understand the evolutionary processes that allow an animal to adapt to its environment,” said Igawa.

Researchers did not find any adult frogs in the onsen, so the species may only be adapted to high temperatures during the early, tadpole stage of life.

Adult Japanese stream tree frogs generally live on the ground, have bumpy skin, and are about three centimeters (1.2 inches) long when fully grown, with females usually being larger than males. Their natural predators include snakes and birds. They are listed as “Least Concern” on the International Union for Conservation of Nature’s Red List of Threatened Species. 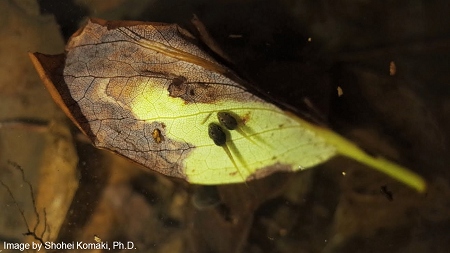 IMAGE CAPTION: Tadpoles of the Japanese stream tree frog can live in water the highest ever-recorded temperatures for any amphibian tadpole, 46.1oC (115oF), in the natural hot springs on Kuchinoshima, a Japanese island. The research from Hiroshima University directly connects the physical ability to adapt to environmental conditions and the ability to disperse over a wide geographic range.
IMAGE CREDIT: Image by Shohei Komaki.
IMAGE LICENSE: Image may only be re-used with attribution.

Funding:
The research was supported by a Japan Society for the Promotion of Science Grant-in-Aid for JSPS Fellows (25-5065) and a grant from the Hiroshima University Education and Research Support Foundation.