Hiroshima, Japan, February 19, 2019 - Hiroshima University, National Institute of Information and Communications Technology, and Panasonic Corporation announced the successful development of a terahertz (THz) transceiver that can transmit or receive digital data at 80 gigabits per second (Gbit/s). The transceiver was implemented using silicon CMOS integrated circuit technology, which would have a great advantage for volume production. Details of the technology will be presented at the International Solid-State Circuits Conference (ISSCC) 2019 to be held from February 17 to February 21 in San Francisco, California[1].

The THz band is a new and vast frequency resource expected to be used for future ultrahigh-speed wireless communications. IEEE Standard 802.15.3d, published in October 2017, defines the use of the lower THz frequency range between 252 gigahertz (GHz) and 325 GHz (the “300-GHz band”) as high-speed wireless communication channels. The research group has developed a single-chip transceiver that achieves a communication speed of 80 Gbit/s using the channel 66 defined by the Standard. The research group developed a 300-GHz-band transmitter chip capable of 105 Gbit/s [2] and a receiver chip capable of 32 Gbit/s [3] in the past few years. The group has now integrated a transmitter and a receiver into a single transceiver chip.

“We presented a CMOS transmitter that could do 105 Gbit/s in 2017, but the performance of receivers we developed, or anybody else did for that matter, were way behind[3] for a reason. We can use a technique called ‘power combining’ in transmitters for performance boosting, but the same technique cannot be applied to receivers. An ultrafast transmitter is useless unless an equally fast receiver is available. We have finally managed to bring the CMOS receiver performance close to 100 Gbit/s,” said Professor Minoru Fujishima, Graduate School of Advanced Sciences of Matter, Hiroshima University.

“People talk a lot about technological singularity these days. The main point of interest seems to be whether artificial superintelligence will appear. But a more meaningful question to ask myself as an engineer is how we can keep the ever-accelerating technological advancement going. That’s a prerequisite. Advances in not only computational power but also in communication speed and capacity within and between computers are vitally important. You wouldn’t want to have a zero-grav operation on board a space plane without real-time connection with earth stations staffed by medical super-AI and doctors. After all, singularity is a self-fulfilling prophecy. It’s not something some genius out there will make happen all of a sudden. It will be a distant outcome of what we develop today and tomorrow,” said Professor Fujishima. 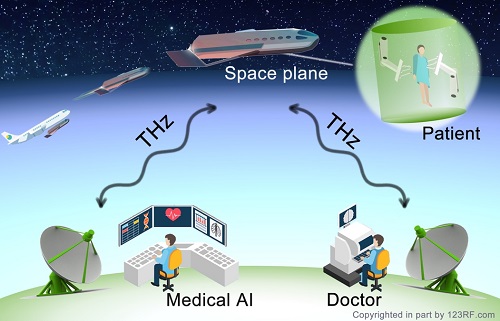 “Of course, there still is a long way to go, but I hope we are steadily paving the way to such a day. And don’t you worry you might use up your ten-gigabyte monthly quota within hours, because your monthly quota then will be in terabytes,” he added.

This work was supported by the R&D on Wireless Transceiver Systems with CMOS Technology in 300-GHz Band, as part of an R&D program on Key Technology in Terahertz Frequency Bands of the Ministry of Internal Affairs and Communications, Japan.