Young giant clams get necessary symbiotic algae from the feces of their parents, updating the age-old adage: one clam’s trash is another clam’s treasure. 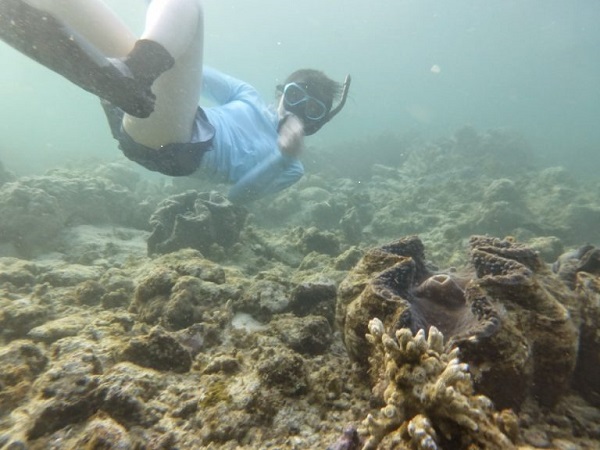 Researchers may have a solution, published in PLOS One, to a mystery of how giant clams found in healthy coral reefs acquire symbiotic algae from their environment; through the feces of their parents.

Coral reefs are a hotspot of biodiversity, hosting numerous species of animals and fish that help one another maintain a harmonious environment. One of these species is the giant clam. They are the biggest shellfish in the world, with 13 species found so far. One of the most famous species, Tridacna gigas, can live more than 100 years and grow to more than a meter wide. Their size and beautiful shells have led to their popularity as ornaments and as a delicacy, but this has resulted in their endangerment.

Impressive size and beauty and are not the only notable facts about giant clams, they also play host to symbiotic algae: Zooxanthellae. These algae have a very important role in the maintenance of the coral reef, they provide food for the coral and clam through products of photosynthesis. About 80% of coral reef nutrition and 65-70% of giant clam nutrition comes from the symbiotic relationship with zooxanthellae. However, these algae are not able survive without a host and don’t appear to be present in large amounts in the water or sediment surrounding the coral reef.

“In the coral reef the water is very clear, this means there is no food floating around. The zooxanthellae feed the coral reefs.” explains Professor Kazuhiko Koike, Graduate School of Integrated Sciences for Life at Hiroshima University and leader of this study.

Although these algae are vital to the coral reef, they must be obtained through the environment somehow because most of corals and giant clams do not obtain zooxanthellae from their parents.

“The only big mystery of coral reefs is where do the zooxanthellae come from?” says Koike

“One of my former students, Shota Ikeda, found that if a coral reef is very healthy the giant clams are always there.” describes Koike. “There are many scientists with big research budgets already looking at coral. So, we changed our [research] model to the giant clam.” 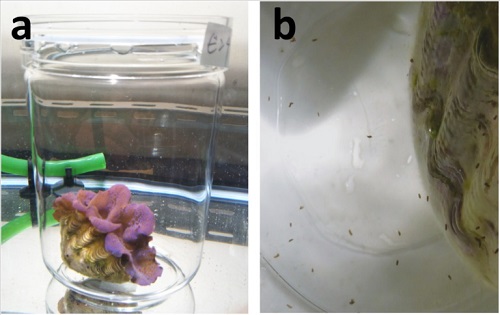 The giant clam Tridacna crocea (a) and its fecal pellets (b) Credit: Kazuhiko Koike/ Hiroshima University

While researching the giant clams, a member of the research team (Shinya Morishima) noticed that the fecal pellets were full of zooxanthellae. When the algae were studied under a fluorescent microscope, the scientists observed that they were alive and active, with intact chloroplasts (parts of the cell that perform photosynthesis). The team then grew juvenile clams in the laboratory and fed them fecal pellets from adult giant clams originally harvested in Okinawa. 34% of the larvae took up the zooxanthellae from the fecal pellets and 5% of larvae established symbiosis with feces-borne zooxanthellae reached, a rate higher than current experimental methods.

The types of zooxanthellae contained in the larvae were similar to those in the fecal pellets and were photosynthetically active.

Although this is a preliminary study, Koike believes that this could help solve a big mystery to coral reef maintenance.

“This is the first step to expand our research to coral reefs.” hopes Koike.