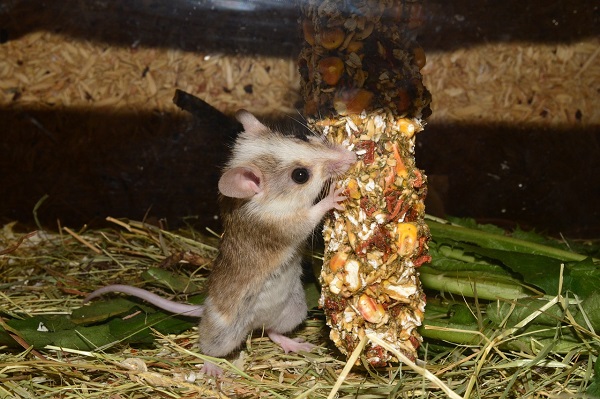 Scientists create a mouse model that can show kidney disease progression and treatment in live animals.

Researchers at Hiroshima University used genetically engineered mice to show the severity and progression of kidney disease and recovery during treatment in a new paper published in Scientific Reports in October.

Chronic kidney disease affects 750 million people each year. Aging populations and an increase in diseases such as diabetes will lead to a greater burden of kidney disease.  In general, when doctors want to check if a patient has kidney disease, they must do so by a blood test or by biopsy. This is usually only feasible when the disease is in its later stages. By then it might be too late to treat, and the patients may have to undergo transplant or dialysis.

“So far, there is no method for imaging or visualizing of kidney disease in the early stage in both human and experimental animals. Our paper is the first to propose this solution. This method can let you see how severe the kidney disease is by observing the light emitted from the mice when they still alive,”

In 2016, the team of Associate Professor Noriyuki Yanaka and Asst. Professor Kumrungsee developed a non-invasive method for monitoring obesity-caused inflammation to reduce the number of mice killed during experimentation.

“They are the closest things to us. We cannot see the real effects chemicals have on our bodies in tubes. If we cannot stop using [animals], we should do what we can to reduce the number of them used in testing,” says Kumrungsee.

The mice were engineered with a light-emitting gene that glowed when a protein was present at high levels. This protein (Saa3) is released in high amounts during inflammation or injury so can be a useful biomarker of disease.

In the present study, to monitor disease progression and therapy Prof. Yanaka’s team fed mice a high-adenine diet to cause kidney disease. The high levels of adenine caused crystals (like kidney stones) to develop, leading to inflammation and increased levels of Saa3.  The mice emitted light from their kidneys when under these injury conditions. The team have proposed this mouse model as a useful tool for monitoring kidney disease progression and therapeutic agent screening. 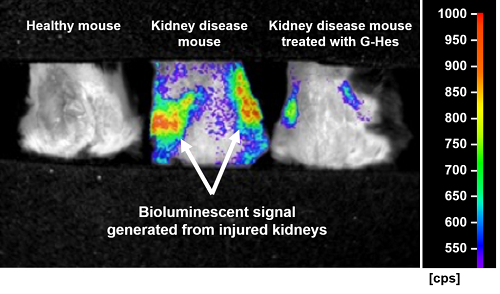 Visualization of kidney disease and therapy by the citrus fruit-derived compound treatment. The genetically engineered mice were anesthetized and put in a prone position under an imaging system machine that allowed us to visualize severity of kidney disease in live animals. Severe kidney disease was clearly seen as a strong light signal from the picture in the center. Treatment with G-Hes showed a decrease in kidney injury and thus a weaker light signal.
Credit: Associate Professor Noriyuki Yanaka and Assistant Professor Thanutchaporn Kumrungsee

The researchers then screened possible treatment options and observed a promising chemical found in citrus fruit: G-Hes. After treating mice with G-Hes for three days, then feeding them the adenine diet for 3 weeks the researchers observed a decrease in the amount of inflammation seen in the kidneys, also confirmed through a blood test. Using this engineered mouse, the team was able to observe the kidneys at 1, 2 and 3 weeks into the diet and treatment without terminating the mice, reducing the number of mice required for the experiments.

In the future, the team would like to perform drug screening by using this model to prevent kidney disease in the early stages.

“We would also like to use this model to find functional foods and plants*. Beyond that If we can find these proteins can be used as a marker to not only detect early-stage kidney disease, but also other issues such as muscle damage,” states Kumrungsee.

This work was supported in part by grants from the Ministry of Education, Culture, Sports, Science, and Technology of Japan (to No. Y).