Scientists found out why people with Zellweger syndrome also get sick with genetic disorders linked to dysfunctions of the cilia or the cell’s “antenna.” 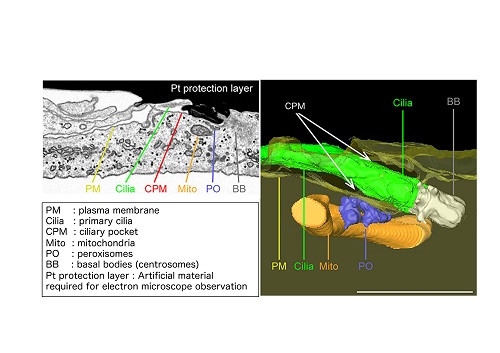 Zellweger syndrome is a rare disease which at its mildest form can cause developmental delays in childhood and vision and hearing loss in adulthood. At its most severe, it can mean weak muscle tone, feeding and respiratory problems, and neonatal seizures. Those who have its extreme form typically do not survive beyond age one.

The origin of this syndrome is traced to a deficiency in the cell’s metabolizers called peroxisomes. But, it is unknown why those who have this disease also experience genetic disorders — like polycystic kidney disease and retinitis pigmentosa — linked to ciliopathy or ailments caused by anomalies in the cell’s cilia, an antenna-like protrusion that picks up signals required for embryonic development and adult tissue maintenance.

Hiroshima University researchers who were looking into the health effects of ciliary cholesterol insufficiency found what’s making patients with peroxisome disorders sick with ciliopathy-associated symptoms. Their findings are published in The Embo Journal.

Their research ushered in the discovery of a new function being performed by peroxisomes as suppliers of cholesterol to the primary cilia. They also learned that an undersupply of ciliary cholesterol causes ciliopathy symptoms to appear in those with Zellweger syndrome.

“It has been reported that ciliary cholesterol is more enriched than cholesterol in other plasma membranes. However, it remains unclear how cholesterol is supplied to primary cilia,” cell biologist Tatsuo Miyamoto, who led the research team, said.

In order to find out if peroxisomes transport cholesterol to the primary cilia and if a deficit in ciliary cholesterol induces ciliopathy symptoms to manifest in people living with Zellweger syndrome, the researchers combined genome editing-based reverse-genetics in human cells with 3D-CLEM/FIB-SEM, the most advanced electron microscope technology.

Although Zellweger syndrome and most ciliopathies are rare diseases, Miyamoto explained that the primary cilia also contain proteins associated with cancers and some common disorders.

“Since ciliary cholesterol is assumed to regulate the activities of these proteins, ciliary cholesterol control might be a new target to develop the drug to cure not only ciliopathy but also common diseases such as cancers and psychiatric or neurological diseases,” he said.

“Therefore, our next challenge is to establish the control technology and medicine for ciliary cholesterol dynamics.”