Researchers at Hiroshima University in Japan have blended together various polymer and molecular semiconductors as photo-absorbers to create a solar cell with increased power efficiencies and electricity generation. These types of solar cells, known as organic photovoltaics (OPV), are devices that generate electricity when light is incident upon their photo-absorbers. The efficiency of a solar cell is determined by comparing how much electricity is generated to how much light is incident upon the cell. This is referred to as “photon harvest”, or how many particles of light are converted into electrical current. The more efficient the solar cell, the more cost effective and pragmatic the cell is for commercial use. 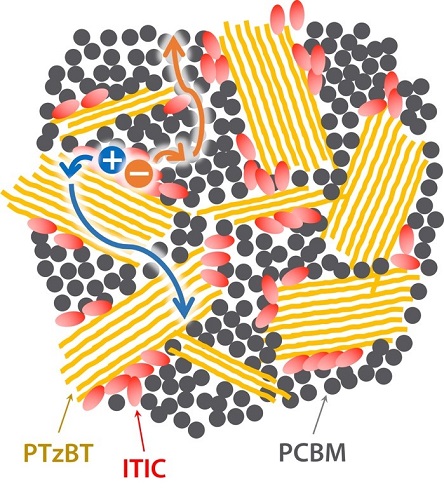 Schematic illustration of the distribution of the materials in the semiconductor layer for the OPV cell.
ITIC is selectively located at the interface of PTzBT and PCBM domains, which leads to an efficient charge carrier (photocurrent) generation.

The team at the Graduate School of Advanced Science and Engineering added only a small amount of a compound that absorbs long wavelengths of light resulting in an OPV that was 1.5 times more efficient than the version without the compound. The compound was able to enhance the absorption intensity due to the optical interference effect within the device. The group went on to show that how they are distributed is key to further improved power generation efficiency.

“The addition of a very small amount of a sensitizer material to an OPV cell, which consists of a semiconducting polymer that we developed previously and along with other materials,” said Itaru Osaka, corresponding author of the paper, published November 2020 in Macromolecules.

“This leads to a significant increase in the photocurrent and thereby the power conversion efficiency due to the amplified photon absorption that originates in the optical interference effect. A key is to use a very specific polymer, one that allows us to have a very thick semiconductor layer for OPV cells, which significantly enhances optical interference effect compared to a thin layer.”

As for future work, Osaka has his eyes set on pushing the boundaries of state of the art solar cells.

“Our next step is to develop better semiconducting polymers as the host material for this type of OPV and better sensitizer materials that can absorb more photons in the longer wavelength regions. This would lead to the realization of the world’s highest efficiency in OPV cells.”