Researchers took a close look at bobtail and bottletail squids to establish their evolutionary relationships and the timing of the divergence of different species. 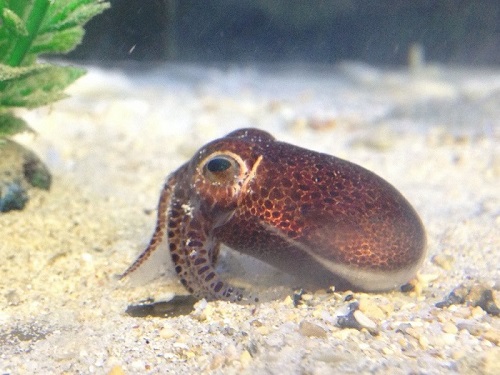 A photo of Euprymna brenneri, the new species of bobtail squid described in the 2019 OIST study. Photo taken by Jeff Jolly, a co-author of this study.

Bobtail and bottletail squids are small marine invertebrates that are easy to collect, reproduce quickly, and can be raised together in large numbers in laboratories, making them useful model animals for research. They’re cephalopods—related to true squid, octopus, and cuttlefish, which are renowned for their intelligence and complex behaviors, but of which scientists still know little about. Now, in a new study, published in Communications Biology, researchers have used genetic techniques to show that bobtail squid and bottletail squid share a relatively recent common ancestor and that major biogeographic events might have shaped the evolution of the many different species.

“With 68 recognized species, bobtail squid are a very diverse family and split into three subfamilies. This study found that one of these subfamilies is further split into two geographic lineages.” explained one of the lead authors, Dr. Gustavo Sanchez, researcher at Hiroshima University and former Visiting Research Student in the Okinawa Institute of Science and Technology Graduate University’s (OIST) Molecular Genetics Unit. “In 2019, as part of my previous research at OIST, we described a new species of bobtail squid, which highlights both the diversity present and that many unknowns remain.”

Bobtail and bottletail squids make up the order Sepiolida. They’re small, normally between 1 and 8 cm, and live in a range of marine habitats around the globe, from shallow coastal waters to the open ocean.

For this new study, Dr. Sanchez, alongside researchers from OIST and the National University of Ireland Galway, collected 32 species of bobtail and bottletail squids from across the Indo-Pacific, the Mediterranean Sea, and the Atlantic Ocean. They use a technique called genome skimming that sequences whole genomes, albeit at low coverage. This allowed them to look at the genetic variations between these species so they could estimate their evolutionary relationships and when they diverged.

Their results revealed that bobtail and bottletail squids split into different families around 66 million years ago. This aligns with the rapid diversification of modern marine fishes, following the disappearance of more ancient groups due to a global mass-extinction (the same one that wiped out most of the dinosaurs). Bobtail squid went on to further diversify into three subfamilies—Sepiolinae and the more closely related Rossinae, and Heteroteuthinae. The researchers found that Sepiolinae, which makes up the largest of these subfamilies, can be further split into two tribes—those that are found in the Indo-Pacific Ocean and those that are found in the Mediterranean Sea and the Atlantic Ocean. This split coincided with another major biogeographic event—the closure of the Tethys Sea, around 50 million years ago, which generated the separation of these two regions and resulted in this subfamily being split in two.

A second interesting part of this study focused on the evolution of a light organ in bobtail squid that allows the production of luminescence. Producing luminescence is important for the survival of many of these animals as it allows for counter-illumination, which keeps them hidden from predators at night. The researchers found that the ancestor of the Sepiolinae subfamily likely possessed a bilobed light organ that housed luminescence-producing symbiotic bacteria. This has been retained by many of the species that exist today but was lost in two groups—one in the Indo-Pacific tribe and the other in the Mediterranean-Atlantic tribe.

“The evolutionary relationship of nearly 50% of bobtail squid still needs to be investigated but this research has provided a reliable foundation for classifying bobtail and bottletail squids,” said Prof Daniel Rokhsar, who leads the OIST Unit. “We hope that this phylogenetic work and ancestral reconstructions will be useful in future studies.”