Broccoli may contain advantages beyond nutrition. A molecule found in broccoli, cabbage and more digests down into DIM, a compound with brighter benefits than the name implies, such as inducing cell death in breast, prostate and colon cancer. Now, researchers are beginning to understand the mechanism underpinning this molecular behavior — information that could help elucidate future anti-cancer treatments.

In a report published on Dec. 10, 2021, in PLOS One, Hiroshima University researchers summarize their finding that DIM, or 3,3’-Diindolylmethane, also triggers controlled whole-cell death and recycling of cellular components in fission yeast. Whether the DIM-induced damage mechanism is conserved in humans remains to be seen, but paper author Masaru Ueno explained that unicellular fission yeast allow for easier examination of molecular machinery that mimics behavior in more complex organisms. 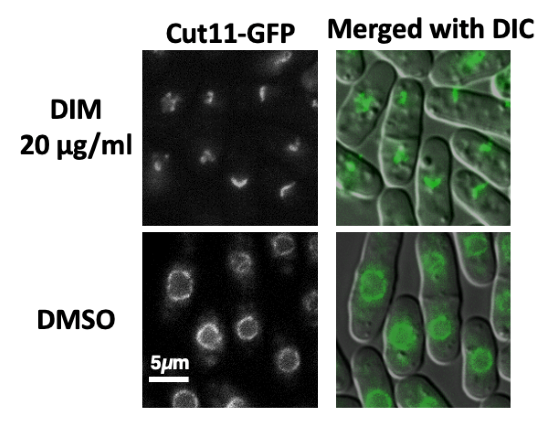 The nuclear membranes enclose the cell’s genetic information. Once the genetic material is replicated, the nuclear envelope, which comprises the inner and outer membranes, pinches into two and part, resulting in two cells where there once was one.

Part of the cell’s process of repair is called autophagy, or "self-eating". It is the degradation pathway of cellular components, where the cell will consume its internal parts to conserve energy and streamline life-sustaining processes. Ueno also noted that autophagy is implicated in both aging and age-related diseases. If repair is no longer an option, cells will rupture in a programmed death process called apoptosis. According to Ueno, many cytotoxic anticancer drugs work by inducing apoptosis, so being able to control the process can help preserve and improve human health.

“Our results suggest that the nuclear envelope could be one of the early targets of DIM,” said paper author Parvaneh Emami, graduate student in the Graduate School of Integrated Sciences for Life, Hiroshima University.

This finding builds on a previous report from a research team in Germany, who found that a high concentration of DIM increases the lifespan of fission yeast. It may seem counter-intuitive that an apoptosis-inducing compound can increase the lifespan of an organism, but Emami explained DIM appears to prompt such behavior only in exponentially dividing cells — like cancer. If cancer cells die off, the organism can live longer.

“Recent studies in humans show that DIM is a potential anti-cancer drug that acts by the induction of apoptosis in a wide range of cancer types, including breast, prostate, gastric and pancreatic,” Ueno said. “Research also demonstrates that DIM induces autophagy in cancer cells. However, the impact of autophagy on tumor formation and progression are not fully understood. The understanding of apoptosis and autophagy mechanism by DIM in fission yeast may be helpful for human cancer and longevity research. We think that study of the nuclear envelope structure could be a good starting point for these cases.”

The researchers will continue investigating the role of DIM in fission yeast.