By Emma Buchet and Rachel Webber 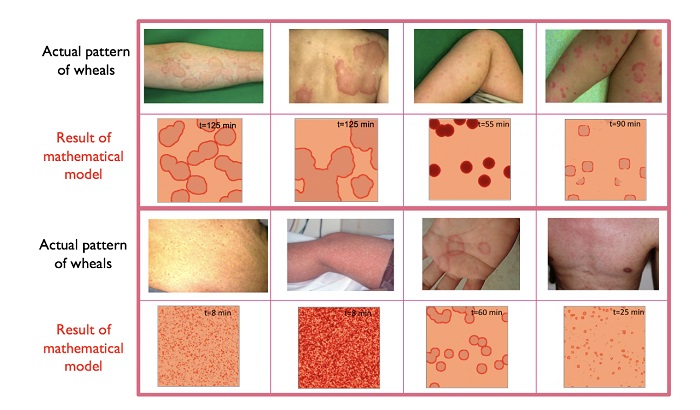 Hives afflict 1 in 5 people, but the exact mechanisms behind the itchy red rashes are not well known.

The research team studied the patterns of hives in patients and reproduced the hive patterns using a mathematical model called a reaction-diffusion model, a common prototype for understanding how patterns develop. The researchers' model is a single equation type which had never before been used. to generate complex patterns.

In response to injury, allergens, or stress, hives can form when cells called mast cells in the skin release a compound called histamine. The red swollen mark (also known as wheals) can range from a few millimeters to the size of a hand or even larger.

While research has shown that histamine itself helps mast cells release histamine, this study considers for the first time that certain mechanisms might also inhibit histamine release and that there may be more going on behind the disease than previously thought.

“Our model succeeded in creating complex pattern of urticaria (hives), which is a very surprising result from both mathematical and biological points of views,” said lead author and Associate Professor Sungrim Seirin-Lee.

To create the equation, the researchers gave rashes to eight healthy volunteers and measured the time it took for the rash to form and determined the velocity of formation. The team then looked at 14 patients with urticaria and measured them using the same model as the healthy patients.

Rather than relying solely on biological studies to investigate hives, which often requires inducing hives in patients, the mathematical focus provides a new avenue for skin disease research. In the future, the mathematical model could possibly be used as a tool to find the molecules which play a role in the inhibition process, as well.

“Finding the mechanism of urticaria is difficult only by biological methods,” said Seirin-Lee. “Thus, we tried a completely different approach, mathematics. The approach using mathematical model for urticaria is the first trial in the world.”

Ultimately, the findings from the study will help put together a more detailed picture of how the common skin disease develops and how to effectively deliver treatments.