The International Year of the Nurse and the Midwife culminated in 2020 by recognizing the 100 Outstanding Women Nurses and Midwives — among them Hiroshima University Professor Yoko Shimpuku. 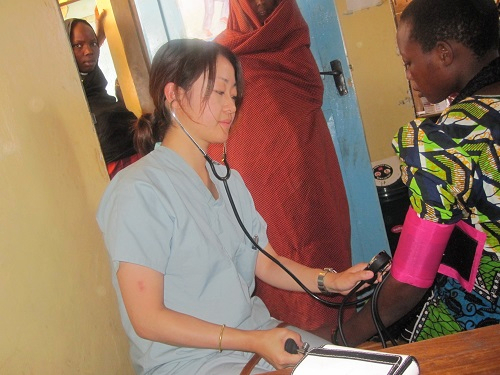 Professor Yoko Shimpuku of Hiroshima University’s Graduate School of Biomedical and Health Sciences is one of 2020’s 100 Outstanding Women Nurses and Midwives awardees. She conducts fieldwork in Tanzania to improve maternal and child health conditions and works with the World Health Organization to promote the Early Essential Newborn Care program.

The International Year of the Nurse and the Midwife culminated in 2020 with a celebration of the achievements and societal contributions of 100 exceptional women nurses and midwives worldwide — among them Hiroshima University Professor Yoko Shimpuku who was the sole awardee from Japan.

The 100 Outstanding Women Nurses and Midwives award features the accomplishments of nurse and midwife leaders from 43 countries while putting the spotlight on the courageous work millions of other women in the field are doing, especially as the world faces a raging pandemic. The award was made possible through the partnership of the World Health Organization (WHO), United Nations Population Fund (UNFPA), Nursing Now, International Council of Nurses (ICN), International Confederation of Midwives (ICM), and Women in Global Health (WGH).

A midwifery expert and academic, Shimpuku is actively involved in research, skills development, and policy work at a national and global level. She is deeply engaged in maternal and child health research in Tanzania, where her focus is on improving the quality of antenatal care and midwifery education. The establishment of one of the first midwifery Master’s programs in Tanzania is among Shimpuku’s most notable accomplishments.

At a national level in Japan, Shimpuku has devoted herself to educating nurses and midwives with wide global experiences and perspectives as a professor at HU’s Graduate School of Biomedical and Health Sciences. She also holds leadership roles in various societies for young scientists as an executive committee member of the Global Young Academy and vice-chair of the Young Academy Japan.

She had presented at numerous international conferences and meetings, including the 2019 UN International Day of Women and Girls in Science Assembly and the G7 Academy Meeting, and reported to the Japanese prime minister as part of her science diplomacy work.

Her latest undertaking was the development of an educational smartphone app that provides midwives life-saving information based on WHO guidelines.

“Through these activities and many more, Professor Shimpuku has had a highly positive impact on the global health ecosystem, with further prominent examples of this impact including reporting her work to Japan’s Prime Minister, providing a lecture to HRH Princess Akishino of Japan, her speech at the United Nations’ 5th International Day of Women and Girls in Science, and her work as a member of the Science Council of Japan’s Gender and Diversity and Gender Equal Participation Committees,” her profile on the website dedicated to the International Year of the Nurse and the Midwife said.

WHO designated 2020 as the International Year of the Nurse and the Midwife to commemorate the 200th anniversary of Florence Nightingale's birth.