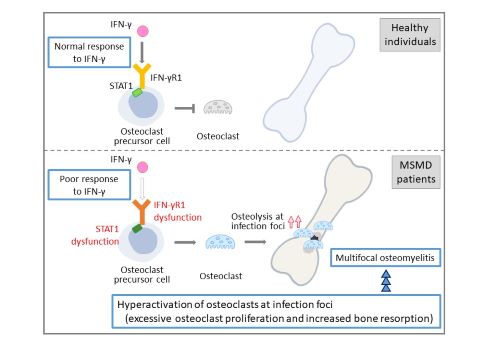 The suggested disease model of multifocal osteomyelitis in MSMD patients

Researchers at Hiroshima University have discovered the mechanism underlying multifocal osteomyelitis in MSMD patients with poor response to IFN-γ. IFN-γ plays an inhibitory role in osteoclast formation. Impaired response to IFN-γ in MSMD patients leads to excessive osteoclast proliferation and, by inference, increases bone resorption in infected foci, which may underlie multifocal osteomyelitis.

About a quarter of the world’s population is infected with tuberculosis bacteria, according to the World Health Organization, but only about 5 to 10% of those infected will develop symptoms. These pathogens are mycobacteria, which are everywhere, including in chlorine-treated tap water. Most people who encounter mycobacteria will never even know, but, for a few immunocompromised groups, the ubiquitous organisms can cause painful, difficult-to-treat conditions. One such group has Mendelian susceptibility to mycobacterial disease (MSMD), a rare genetic condition discovered in 1996 that results from a range of mutations involved in the body’s immune response. Only about 400 people — mostly children — in the world have been diagnosed, likely due to the clouded understanding of the disorder and the infections that can result from mycobacterial susceptibility.

“Multifocal osteomyelitis — bone infection at multiple points — is among the representative manifestations of MSMD,” said Satoshi Okada, professor in the Department of Pediatrics, Hiroshima University’s Graduate School of Biomedical and Health Sciences. “However, it is unclear why patients with MSMD frequently develop multifocal osteomyelitis, chronic inflammatory bone diseases.”

Now, a team led by Okada has revealed a molecular underpinning of the chronic bone infection in patients with MSMD. According to Okada, this finding could lead to better understanding the full immune response and reactions that leads to multifocal osteomyelitis in patients with MSMD. They published their results on June 24 in The Journal of Allergy and Clinical Immunology.

“The frequency of multifocal osteomyelitis is especially high in patients with MSMD due to an impaired response to a cell signal called interferon gamma (IFN-γ),” said first author Miyuki Tsumura, research fellow in the Department of Pediatrics, Hiroshima University’s Graduate School of Biomedical and Health Sciences. “We initiated this study to investigate the possibility that IFN-γ signaling may play a role in the pathogenesis of multifocal osteomyelitis.”

With osteoclast precursors derived from bone marrow cells cultivated from three patients with MSMD, caused by mutations that result in a defective response for IFN-γ, and healthy volunteers, the researchers examined osteoclast formation in the presence or absence of IFN-γ.

When IFN-γ was added to healthy cells, osteoclast formation stopped, as expected.

When it was added to the cells from patients with MSMD, the response was impaired — the cells resisted the call to stop formation.

“These results suggest that impairment of IFN-γ-induced inhibition of osteoclast differentiation and bone resorption in the context of signaling molecule deficiencies, leading to excessive osteoclast proliferation and increased bone resorption at infection points, may underlie multifocal osteomyelitis,” Okada said.

The researchers plan to completely characterize the molecular mechanisms underlying multifocal osteomyelitis by further studying the overproduction of osteoclasts and investigating the role of osteoblasts — cells that make new bone.

The Japan Society for the Promotion of Science’s Grants in Aid for Scientific Research and the Japan Agency for Medical Research and Development’s Practical Research Project for Rare/Intractable Diseases supported this work.