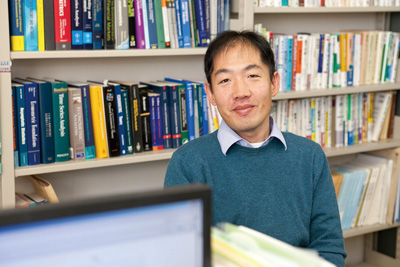 Researchers in Japan and the UK and USA have developed a better method for modelling important kinds of economic data that may be useful for studying workforces, economic development, health, macroeconomics and other phenomena that vary over time.

Dr. Kazuhiko Hayakawa from Hiroshima University and Professor M. Hashem Pesaran from the Trinity College of Cambridge and the University of Southern California present their new and improved approach in the Journal of Econometrics.

The new method improves existing techniques for modelling the kind of data that economists call “panel data,” which comes from observing individuals, states, countries, firms and so on, over multiple time periods.

Because panel data include observations of multiple individuals obtained over multiple time periods, they offer rich opportunities for economists to apply a variety of analytical tools, explains Hayakawa. “Thanks to the recent development of information technology, such two-dimensional datasets are more easily collected than before.”

The power of panel data is that it combines cross-sectional data and time-series dimensions allowing economists to conduct analyses that would be impossible using either type of data alone.

A simple example of the use of panel data is in measuring the effect of job-training on two groups of people with similar attributes such as educational background, age and occupation.

Dr. Hayakawa’s work focuses on dynamic panel data models, which are often used in empirical economic studies. The dominant approach for estimating such models is known as generalized method of moments (GMM). “However, some previous studies have shown that GMM tends to have unsatisfactory performance,” he notes.

These shortcomings led him to consider another technique, known as the maximum likelihood (ML) method. The new approach he has now published extends the previous study of the ML method so that it allows for it to be useful in more realistic situations, Dr. Hayakawa explains.

“The work was far from simple, however,” he notes. “We needed to account for a statistical problem called the incidental parameter problem. Fortunately, we were able to prove that some properties of the previous method are still valid even if that problem is ignored. Also, we proposed a corrected method so that it can be applied in empirical economic studies.”

Professor M. H. Pesaran, the co-author of the paper, also says “there is still room to improve the method so that it becomes more practically relevant.” He says that the proposed method could be made even more sophisticated, and expects that it will be used more frequently in empirical studies.

Dr. Hayakawa says: “Using panel data, we can analyze the effect of clinical trials, the effect of advertisements, and the effect of economic policies and so on. We expect that more researchers will utilize our modelling in a wide range of fields.”