Flip a coin. Heads? Take a step to the left. Tails? Take a step to the right. In the quantum world? Go in both directions at once, like a wave spreading out. Called the walker analogy, this random process can be applied in both classical and quantum algorithms used in state-of-the-art technologies such as artificial intelligence and data search processes. However, the randomness also makes the walk difficult to control, making it more difficult to precisely design systems.

A research team based in Japan may be moving toward a more controlled walk by unveiling the mechanism underlying the directional decision of each quantum step and introducing a way to potentially control the direction of movement. They published their results on October 16 in Scientific Reports, a Nature Research journal.

“In our study, we focused on the coin determining the behavior of the quantum walk to explore controllability,” said paper author Haruna Katayama, graduate student in the Graduate School of Integrated Arts and Sciences at Hiroshima University.

In classical systems, the coin directs the walker in space: right or left. In quantum systems, a coin is infinitely less reliable, since the walker operates both as a particle stood in one space and as a wave stretched out in every possibility across time.

“We introduced the time-dependent coin of which the probability of landing on heads or tails varies temporally for unveiling the function of the coin,” Katayama said.

This time-dependent coin can shift the walker’s position, the researchers found, but the wave characteristic of the walker obscured how much physical space the coin controlled.

“We succeeded in clarifying the equivalence of two completely different concepts — the equivalence of the rate of change in coin probability and the velocity of the wave — for the first time,” Katayama said. “This unveiled mechanism enables us to control the quantum walk on demand by manipulating the coin with preserving the random process, providing core fundamental elements of innovative quantum information processing technologies such as quantum computing.”

“The walking mechanism enables us to tailor quantum walks as we desire by manipulating the coin flipping rate,” Katayama said. “In addition, we have found that the quantum walk with the desired trajectory can be realized on demand by designing the coin. Our results open the path towards the control of quantum walks.” 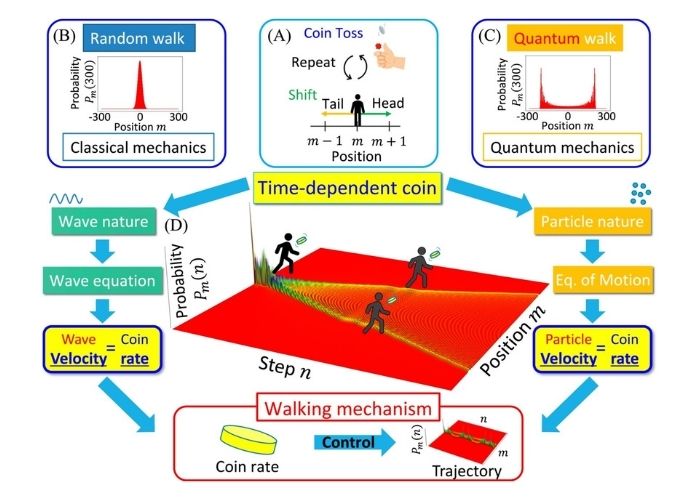 Schematic diagram of this study

The random walk is one of the models of the stochastic process. (A) represents the basic operations composed of coin tosses and shifts in the random walk. The walker with a coin shifts to the right or left by one step depending on the result of the coin toss, and then repeats to do that. The probability distribution of the walker’s position after many steps has a peak at the starting point as shown in (B). The quantum walk is the counterpart in the quantum world of the random walk. In the quantum walk, the walker behaves like waves as well as particles due to the wave-particle duality. Therefore, the probability distribution spreads on both sides indicated in (C) because of the superposition of states and the Interference effect unlike that of the random walk. In our study, we use the time-dependent coin to explore the controllability of the quantum walk. We have revealed the walking mechanism i.e. the physical quantity corresponding to the coin by both of the wave nature and the particle nature (see the flow diagram around the central diagram (D)). In the wave nature, we have derived the wave equation and found that the wave velocity corresponds to the coin rate. In the particle nature, we have focused on the equation of the motion of the particle (walker) and obtained the same result. As a result, we have unveiled the walking mechanism that the coin rate of the quantum walk controls the trajectory. In addition, we have found that the quantum walk with the desired trajectory can be realized on demand as shown in (D) by designing the coin.

This work was supported in part by the Okawa Foundation for Information and Telecommunications.