Why can fish schools or bird flocks form ordered patterns even without a leader? Associate Professor Takuma Sugi is decoding the algorithms behind these smart swarms with the help of worms. 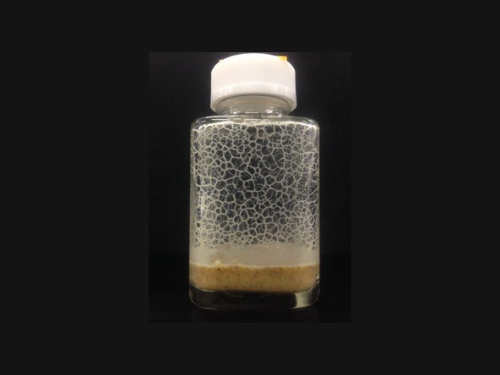 It would have been easy to dismiss the geometrically patterned bottles as room decor. Only in the laboratory of Hiroshima University Associate Professor Takuma Sugi, these weren’t artsy displays. If you look closer, you would see that the bottles’ crisscrossing designs were alive, formed by hundreds of thousands of C. elegans worms, each one as big as the period at the end of this sentence.

Systems like this — exhibiting coherent collective behavior even without a central authority orchestrating the movements — are examples of active matter. And its many forms are all over in nature.

“People, both non-scientists and scientists, are fascinated with collective pattern formations as in flocks of birds and schools of fish,” Sugi said.

He explained that animals, including humans, collectively self-organize to increase their survival and reproduction rate. Swirling flocks of starlings could confuse predators into thinking they’re one colossal beast. And schools of snappers can increase their odds of successful reproduction.

“Each animal does not know its own position in collectives,” Sugi said. Yet somehow, flocks of birds and schools of fishes can move around and abruptly change direction as one without colliding or straying away from the pack.

“Why can randomly moving animals form ordered patterns even without a leader?” he raised.

Such behavior is absent in low-density groups. This capability is unlocked only when there is enough of them to form a flock, school, or swarm. Sugi is decoding the algorithms that propel these smart swarms. But doing controlled experiments in a laboratory with these numbers is unthinkable.

“Understanding a mechanism underlying collective pattern formation requires both theoretical and experimental studies. But no one could hope to do controlled experiments with 10,000 real birds or fish,” he said. 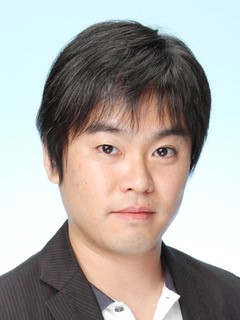 Sugi discovered that a worm already used in laboratories for over half a century is a perfect candidate to study this behavior. C. elegans, which share many genes with us, have been extensively researched to understand aging, immunity, and diseases in humans. They are quick to grow in laboratories, and their transparency makes it easy to monitor behavioral and cell changes under a microscope.

He himself had been exploring neuroscience with the help of this worm. In 2011, he published his research demonstrating how its non-neuronal cells can trigger behavioral changes the same way thermosensory neurons do.

In 2019, he and his colleagues were able to show that once you get a swarm of them together, these worms form dynamical networks never seen before.

Their findings suggested that the critical factors behind the collective pattern formations were the worms’ alignment after collision and smooth turning. That study was the first to use the worm in exploring active matter.

Their research on the feats accomplished by bundles of this microscopic animal was one of the 34 studies highlighted in 2019 by Nature Reviews Physics, a scientific journal belonging to the prestigious Nature portfolio.

“We investigated the mechanism underlying this animal’s collective behavior from the perspective of physics,” he said.

The next step, he added, is to examine collective behavior in C. elegans from the viewpoint of neuroscience and genetics using genome editing techniques, a matter he had accomplished in this worm before. Nearly eight years ago, he and fellow scientists used TALEN gene-editing technology to create a mutation in the worm’s AMPA-type receptor linked to defective sensory behavior.

In their active matter study, Sugi observed that mutant worms move at a curvier trajectory and form tighter networks than non-mutants.

“We would like to know the neural computation driving collective behavior.”

Sugi is now working on a new microscopy technique that will allow them to investigate the neural circuit basis of the worm’s collective behavior and its decline in real-time. With a life cycle of two weeks, this worm can offer insights into how its neural circuit function dwindles as it ages.

“We are often fascinated with the emergence of more intelligent behaviors when living things collectively self-organize at the population level. Our ultimate research purpose is to understand the origin of this intelligence.”