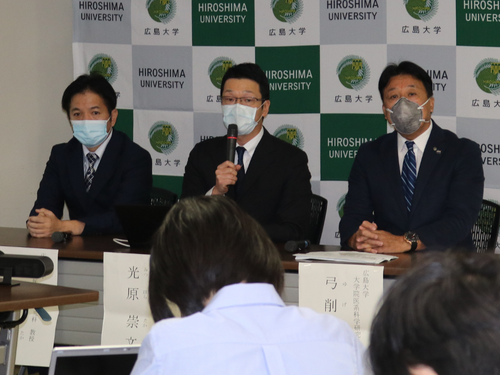 HU made the announcement about the clinical trial on September 7. The first patient in the trial received the initial intravenous dose of MSCs in August.

Speaking at the conference were the HU researchers leading the clinical study — Department of Neurosurgery’s Professor Nobutaka Horie and Assistant Professor Takafumi Mitsuhara and Bio-Environmental Adaptation Sciences Professor Rui Yuge. The three have been studying the use of MSCs for nerve regeneration therapy and have successfully demonstrated that cranial bone-derived MSCs effectively restored neurological function in rat models of brain infarction and spinal cord injury.

The proposed therapy uses patients’ own cultured MSCs taken from their cranial bone, known as autologous cranial bone-derived MSCs, as a treatment for moderate to severe cerebral infarction — from which neurological dysfunction recovery is extremely difficult with standard treatment. Cerebral infarction, which clinically manifests as ischemic stroke, happens when blood and oxygen supply to the brain is disrupted, most commonly due to a blood clot blocking blood vessels.

A stroke can cause a build-up in intracranial pressure that may lead to lasting brain injury or even death. In such an urgent situation, neurosurgeons have long performed extracranial decompression, reducing the increased pressure by removing a large area of the skull and replacing the dura mater with a substitute membrane, such as a periosteum or artificial dura mater.

However, in patients with moderate to severe stroke, even if the surgery saves their lives, it could not repair the damage inflicted by the life-threatening condition on their brain tissues. Many moderate to severe stroke patients, whose brain pressure could not be controlled without removing the skull, end up with severe residual disabilities and require assistance and care in their daily lives. Some of stroke’s sequelae include paralysis, speech impairment, cognitive decline, dysphagia or difficulty in swallowing, spasticity or muscle stiffness, depression, Parkinson’s syndrome, symptomatic epilepsy, and urinary disorders. Currently, stroke has no established treatment after the recovery period.

A 2007 survey on living conditions by Japan’s Ministry of Health, Labour and Welfare showed that stroke was the top 2 cause of dementia and the need for nursing care in the nation and the leading reason behind becoming bedridden. Annually, medical expenses for stroke across Japan amount to approximately 1.8 trillion yen, while nursing care reaches an estimated 1.9 trillion yen in costs.

The novel stem cell treatment can offer hope for patients wanting to revert to how their body was pre-stroke, especially since, according to the researchers, stroke cases in Japan are expected to more than double from 1.3 million in 2019 to three million in 2025 as the population ages.

MSCs, which are multipotent and capable of developing specific kinds of cells, can be obtained from different sources, but their characteristics may vary depending on the tissue of origin. The researchers said that cranial bone-derived MSCs are superior to the ones isolated from the iliac bone, the most exploited source of MSCs, as they possess greater (1) expression of neurotrophic factors, (2) neuroprotective effect of culture supernatant, and (3) ability to differentiate into nerves. A previous study using a rat model of cerebral infarction also showed that MSCs derived from rat and human cranial bones proved to be abundant with neurotrophic factors, proteins that strengthen neuron health and functional recovery.

In the proposed treatment, the cells are cultured for four to six weeks. About 100 million cells per patient are prepared for intravenous administration two to three months after the onset of cerebral infarction. The autologous cranial bone-derived MSCs are intravenously injected in the subacute stage to examine the safety and efficacy of the treatment. The target number of patients for the clinical trial is six.

The clinical trial is now at Phase 1 and 2a stages of testing. It is being conducted by the HUMAN (Hiroshima University Mesenchymal stem cell Application for Neuro-regeneration) Project, a collaboration among HU’s Departments of Neurosurgery and Bio-Environmental Adaptation Sciences and HU-originated venture companies TWOCELLS Co., Ltd. and Space Bio-Laboratories Co., Ltd. The project aims to develop clinical applications of cell therapy for severe neurological diseases. The study period for the clinical trial is until December 31, 2023.