A Japanese research team created a new way to sort living cells suspended in fluid using an all-in-one operation in a lab-on-chip that required only 30 minutes for the entire separation process. This device eliminated the need for labor-intensive sample pretreatment and chemical tagging techniques while preserving the original structure of the cells. They constructed a prototype of a microfluidic chip that uses electric fields to gently coax cells in one direction or another in dielectrophoresis, a phenomenon or movement of neutral particles when they are subjected to an external non-uniform electric field.

The Hiroshima University Office of Academic Research and Industry-Academia-Government and Community Collaboration, led by Professor Fumito Maruyama, published their findings on January 14 in iScience. 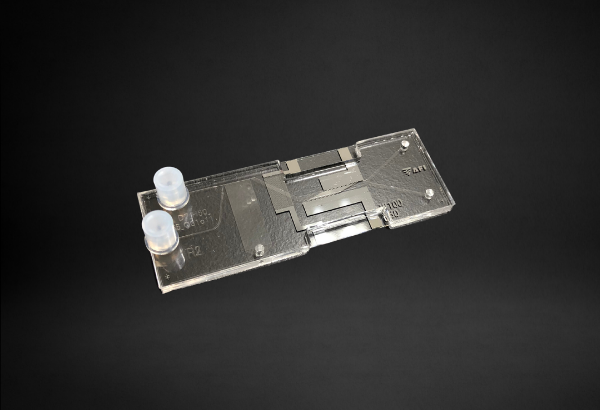 Dielectrophoresis induces the motion of suspended particles, such as cells, by applying a non-uniform electric field. Since the strength of dielectrophoretic force depends on the size of the cell and its dielectric properties, this technique can be used to selectively separate cells based on these differences. In this paper, Maruyama and his team introduced the separation of two types of eukaryotic cells with the developed microfluidic chip that used dielectrophoresis.

Dielectrophoresis could be particularly useful in separating living cells for medical research applications and the medical industry. Its most significant advantage over other methods is its simplicity.

“In conventional cell separation methods such as commercially available cell sorters, cells are generally labeled with markers such as fluorescent substances or antibodies, and cells cannot be maintained in their original physical state,” Maruyama said. “Therefore, separating differently sized cells using microfluidic channels and dielectrophoresis has been studied as a potentially great method for separating cells without labeling.”

Maruyama noted, “Dielectrophoresis cannot entirely replace existing separation methods such as centrifuge and polyester mesh filters. However, it opens the door to faster cell separation that may be useful in certain research and industrial areas, such as the preparation of cells for therapeutics, platelets, and cancer-fighting T-cells come to mind.”

Other common medical industry uses of cell separation include removing unwanted bacteria cells from donated blood and separating stem cells and their derivatives, which are crucial for developing stem cell therapies.

“If enrichment of a certain cell type from a solution of two or more cell types is needed, our dielectrophoresis-based system is an excellent option as it can simply enable a continuous pass-through of a large number of cells. The enriched cells are then easily collected from an outlet port,” Maruyama added.

The process outlined by Maruyama and his colleagues was all-in-one.

“Future research may examine refinements, allowing us to use dielectrophoresis to target certain cell types with greater specificity.”