Water is an abundant and essential compound, found everywhere on earth. Yet despite its familiarity and simple structure, water displays many unusual physical properties. For more than a century, scientists have turned their attention to the study of water, attempting to better interpret its structure. An international team of researchers, led by a scholar from Hiroshima University, has developed a procedure allowing them to reproduce the double peak feature of x-ray emission spectroscopy (XES) spectra in liquid water.

The study helping to advance the understanding of the structure of water, led by Osamu Takahashi, an associate professor at Hiroshima University’s Graduate School of Advanced Science and Engineering, is published on February 25 in Physical Review Letters. 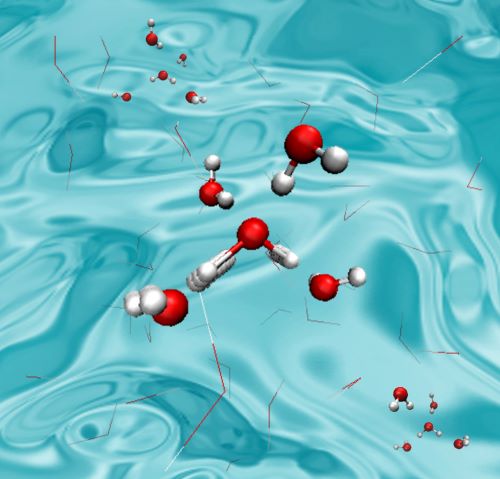 Through the years, as scientists have worked to better understand the structure of liquid water, some have studied water using a two-structure model. Other scientists, in a wide range of fields, have used a uniform, continuous liquid model. XES has proven to be a useful tool for researchers studying substances whose features are not homogeneous.

The team was able to theoretically reproduce the double 1b1 feature, present in liquid water’s x-ray emission spectroscopy. They explored different effects, such as geometry and dynamics, to determine the shape of the XES spectra.

Adopting classical molecular dynamics simulations, the team was able to construct the water’s structure in the liquid phase. In these simulations, the researchers worked at various temperature points with the bond length and water molecule angles fixed. In the spectra they calculated, the researchers were able to reproduce the features, such as the double peaks of the 1b1 state, that had been previously observed by other scientists in experimental XES spectra.

The researchers were able to successfully reproduce the XES spectra of liquid water by examining the effect of full vibrational modes, O-H stretching, bending, and rotational modes. They explained both the temperature and isotope dependence by examining the hydrogen-bond configuration around the excited water molecule and core-hole induced dynamics. “Our procedure is general and can be applicable for various systems related to the phenomena including liquid water,” Takahashi said.

The team is hopeful that their research may help to resolve some of the long-standing debates surrounding the interpretation of liquid water’s structure. Looking to the future, the researchers see various potential applications for their procedure. “Development of new materials such as electrodes used in batteries, biomaterials such as artificial blood vessels, and functional polymers such as water treatment membranes may be fascinating projects, which are related to the structure of liquid water,” Takahashi said.

(left) Theoretical XES spectra of water at different temperatures. Two 1b1 states are assigned as 1b1’ and 1b1”. Intensities of 1b1” are increasing with temperature, whereas those of 1b1’ are decreasing, which is the same trend with the experiment.  (right) Isotope dependence of theoretical XES spectra of liquid water at 300 K. The same isotope effect can be seen in the experiment, with 1b1’ peak having much lower intensity than the 1b1” for deuterium water D2O, whereas for H2O situation is reversed. 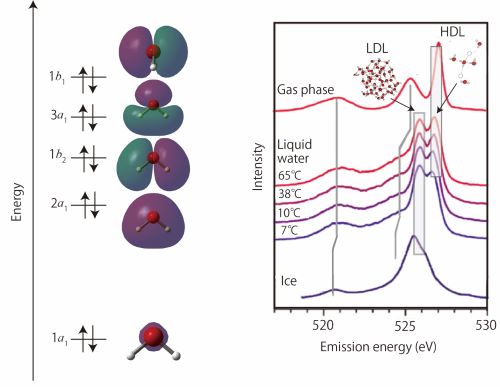