Mycobacteria are a group of pathogenic bacteria that cause diseases like leprosy and tuberculosis in humans. Now, a new study by scientists at Hiroshima University finds that mycobacteria are associated with red blood cells at lung infection sites, an interaction that has escaped scientific notice for 140 years since the discovery of the organism causing tuberculosis.

The new research, published on March 16 in Microbiology Spectrum, illuminated the interaction of mycobacteria with red blood cells and its role in lung disease. 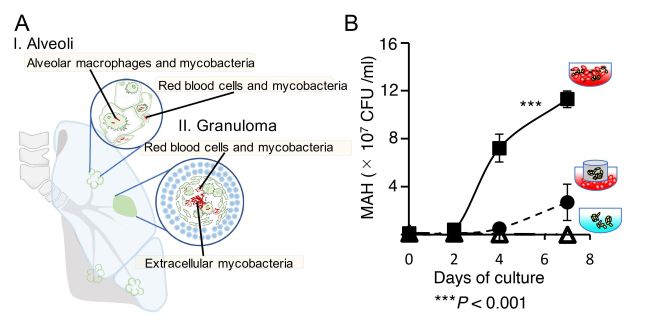 In 1882, German doctor Robert Koch isolated the disease agent that causes tuberculosis (TB) – a bacteria later named Mycobacterium tuberculosis. His work validated French doctor Jean-Antoine Villemin’s earlier evidence that tuberculosis was transmissible. While the use of streptomycin to treat TB would wait another 65 years, Koch’s discovery of the bacterial culprit paved the way for its treatment.

Red blood cells, although also found in the sputum of tuberculosis patients, have not been specifically studied in disease progression.

The researchers obtained lung tissue samples from five mice infected with two species of Mycobacteria – M. avium and M. intracellulare – as well as from a human patient with an MAH infection. Microscopic examination revealed red blood cells were co-located with mycobacteria in both the capillary vessels and granulomas (clumps of immune cells) of mice and human lung tissues.

To assess the relationship of the mycobacteria to human red blood cells, the researchers monitored their growth with and without the blood cells. They found that MAH grew more in the presence of red blood cells, multiplying at a rate dependent on blood cell concentration. Their exponential growth was even faster than growth of MAH inside macrophages. “These results demonstrate that the erythrocytes promoted the vigorous growth of MAH,” says Nishiuchi.

Furthermore, the study found that macrophages, typically targeted as parasitic hosts by mycobacteria, preferentially engulfed red blood cells with MAH attached. The binding of the MAH to red blood cells may have caused the release of energy in the form of ATP, which then stimulated macrophages to engulf the infected cells.

While red blood cells are best known for their role in transporting oxygen between lungs and tissues, they also play two roles in mycobacterial infections. They play a defensive role against infections by capturing pathogens and transferring them to macrophages in the liver and spleen to eliminate them. This study shows that red blood cells may also get targeted as host cells for mycobacteria.

How these roles play out might determine the outcome of an infection. If the red blood cells’ defense role is going well, the TB or other mycobacterial disease is controlled. But red blood cells overwhelmed by an attack of mycobacteria may help spread them throughout the body.

The study authors hope to identify the adhesion factor on the mycobacteria that allows it to stick to red blood cells. The sticking mechanism may hold clues to how the mycobacteria, usually parasitic inside macrophages, can also grow outside of cells. Says Nishiuchi, “Our research will change the conventional common sense that ‘mycobacteria grow intracellularly.’’’ Their goal is to contribute to development new therapies by better understanding how pathogenic mycobacteria navigate host defense systems to spread.

The Japan Agency for Medical Research and Development (AMED); the Japan Society for the Promotion of Science; and the Institute for Fermentation, Osaka (IFO) funded this research.