In disaster mitigation planning for future large earthquakes, seismic ground motion predictions are a crucial part of early warning systems and seismic hazard mapping. The way the ground moves depends on how the soil layers amplify the seismic waves (described in a mathematical site “amplification factor”). However, geophysical explorations to understand soil conditions are costly, limiting characterization of site amplification factors to date.

A new study by researchers from Hiroshima University published on April 5 in the Bulletin of the Seismological Society of America introduced a novel artificial intelligence (AI)-based technique for estimating site amplification factors from data on ambient vibrations or microtremors of the ground. 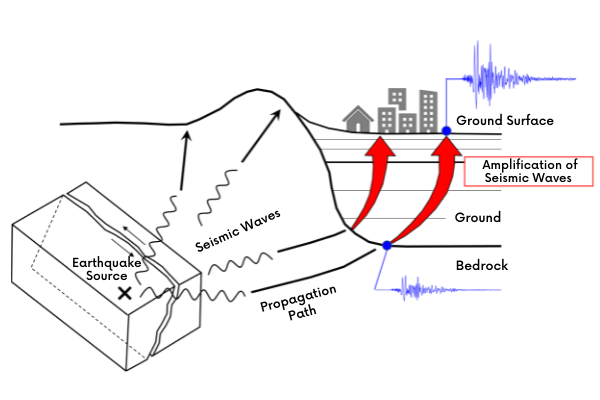 Subsurface soil conditions, which determine how earthquakes affect a site, vary substantially. Softer soils, for example, tend to amplify ground motion from an earthquake, while hard substrates may dampen it. Ambient vibrations of the ground or microtremors that occur all over the Earth’s surface caused by human or atmospheric disturbances can be used to investigate soil conditions. Measuring microtremors provides valuable information about the amplification factor (AF) of a site, thus its vulnerability to damage from earthquakes due to its response to tremors.

The recent study from Hiroshima University researchers introduced a new way to estimate site effects from microtremor data. “The proposed method would contribute to more accurate and more detailed seismic ground motion predictions for future earthquakes,” says lead author and associate professor Hiroyuki Miura in the Graduate School of Advanced Science and Engineering. The study investigated the relationship between microtremor data and site amplification factors using a deep neural network with the goal of developing a model that could be applied at any site worldwide. 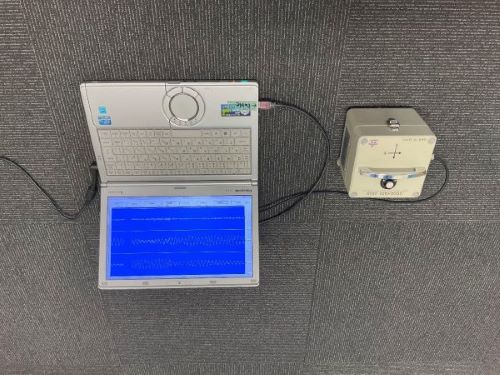 The photo shows microtremor sensor and laptop computer used in this study. Ambient vibrations observed by sensor are digitally recorded in computer through cable. The display of the computer shows three components of vibrations monitoring in real-time. (Photo courtesy of Hiroyuki Miura, Hiroshima University)

The researchers looked into a common method known as Horizontal-to-vertical spectral ratios (MHVR) which is usually used to estimate the resonant frequency of the seismic ground. It can be generated from microtremor data; ambient seismic vibrations are analyzed in three dimensions to figure out the resonant frequency of sediment layers on top of bedrock as they vibrate. Previous research has shown, however, that MHVR cannot reliably be used directly as the site amplification factor. So, this study proposed a deep neural network model for estimating site amplification factors from the MHVR data.

The study used 2012-2020 microtremor data from 105 sites in the Chugoku district of western Japan. The sites are part of Japan’s national seismograph network that contains about 1700 observation stations distributed in a uniform grid at 20 km intervals across Japan. Using a generalized spectral inversion technique, which separates out the parameters of source, propagation, and site, the researchers analyzed site-specific amplifications.

Data from each site were divided into a training set, a validation set, and a test set. The training set were used to teach a deep neural network. The validation set were used in the network’s iterative optimization of a model to describe the relationship between the microtremor MHVRs and the site amplification factors. The test data were a completely unknown set used to evaluate the performance of the model.

The model performed well on the test data, demonstrating its potential as a predictive tool for characterizing site amplification factors from microtremor data. However, notes Miura, “the number of training samples analyzed in this study (80) sites is still limited,” and should be expanded before assuming that the neural network model applies nationwide or globally. The researchers hope to further optimize the model with a larger dataset.

Rapid and cost-effective techniques are needed for more accurate seismic ground motion prediction since the relationship is not always linear.  Explains Miura, “By applying the proposed method, site amplification factors can be automatically and accurately estimated from microtremor data observed at arbitrary site.” Going forward, the study authors aim to continue to refine advanced AI techniques to evaluate the nonlinear responses of the ground to earthquakes. 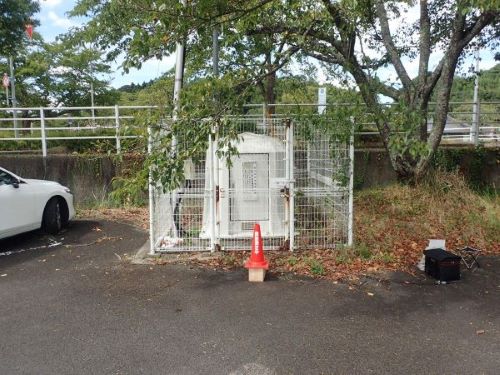 Ambient vibrations of ground are being recorded at a seismic observation station of Kyoshin Network (K-NET), a nation-wide strong-motion seismograph network in Japan since 1996. Seismograph is installed inside white cage. (Photo courtesy of Hiroyuki Miura, Hiroshima University)