Researchers in Japan demonstrated the benefits of a new non-radioactive, neutral negative staining reagent by imaging viruses at nanometer-scale.

Seeing is believing — or, for scientists, the beginning of understanding. Researchers can visualize atomically small details with transmission electron microscopy (TEM) by beaming electrons through the sample and capturing their interactions to form an image. But such tiny specimens can evade the electrons, so they need to be specially treated with heavy metals to ensure interactions. To see viruses, for example, the current standard is to douse the virus sample with a solution containing a radioactive, tightly controlled substance called uranyl acetate.

The resulting images are clear, but the process to procure and store the required radioactive heavy metal solution can be a complicated barrier for researchers, according to Masahiro Sadakane, professor of applied chemistry in Hiroshima University’s Graduate School of Advanced Science and Engineering. Sadakane and his team recently found that a non-radioactive treatment can produce the same clear, detailed images without the bureaucratic fuss of uranyl acetate.

They published their findings on May 12 in Scientific Reports. 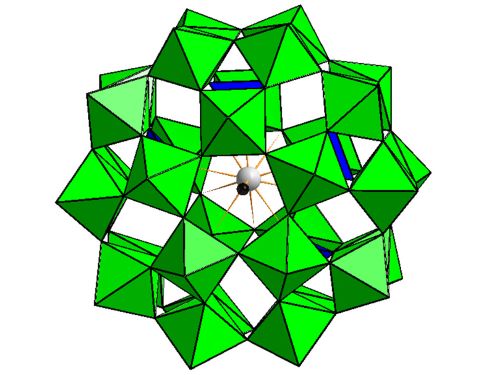 “Observing viral morphology is essential in virology, for which TEM is the most widely used technique because it allows direct visualization at the nanometer scale, but it currently requires heavy element-containing negative staining reagents,” said Sadakane, corresponding author on the paper. “New, non-radioactive compounds for simple, rapid and clear observations using traditional TEM are needed worldwide.”

A current commercially available alternative to the radioactive uranyl acetate is a material known as “Keggin-type” phosphotungstic acid. The molecule comprises a central unit of one phosphate and four oxygens, tightly surrounded by tungsten and more oxygen. While not radioactive, the molecule is highly acidic and must be neutralized prior to use, according to Sadakane. He also noted that the images it produces are less clear than those made with uranyl acetate. However, despite these drawbacks, the reagent belongs to a large family of similar — and possibly better — compounds.

“We have been investigating phosphotungstate compounds, and previously reported that the ‘Preyssler-type’ can be used as a negative staining reagent to observe a fine structure of bacteria,” Sadakane said.

“Preyssler-type molecules also comprise tungsten, oxygen and phosphate, but they are structurally arranged around an encapsulated positively charged ion, such as sodium or calcium. They have a different structure from the Keggin-type compounds, resulting in a much more stable molecule that is produced as a potassium salt.”

The researchers applied Preyssler-type phosphotungstates to stain and image three types of bacterial viruses (phages) which infect bacteria. The morphological structures of these phages are already well documented and provide a reliable reference to check the clarity of images obtained in their study.

“Our results indicate that Preyssler-type phosphotungstates are good negative-staining reagents for virus observations,” Sadakane said. “They are easy to use, since they are not radioactive and do not need adjustment for pH levels, and they provide clear images.”

The researchers plan to build on their findings to develop a series of non-radioactive negative-staining reagents to observe other viruses, as well as small organic particles such as proteins and more, according to Sadakane. 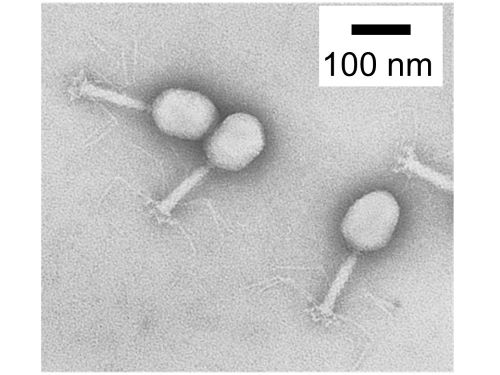 The Japan Science and Technology Agency, Furukawa Foundation, the Catalysis Research Center of Hokkaido University, Core-to-Core Program of the Japan Society for the Promotion of Science, the Mitsubishi Chemical Corporation and the International Network on Polyoxometalate at Hiroshima University supported this work.