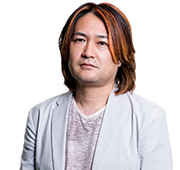 My research relates to theoretical studies on statistics, including theoretical analysis for numerical validation and setting of new approaches of multivariable analysis, which is an approach for analyzing multivariable data with two or more variables. Recently, I am engaged in the development of methodologies for the analysis of multivariable data with a huge number of variables (high-dimension data) and an approach for theoretical validation of such methodologies. More concretely, the focal point of my studies is the development of variable selection model for determining the necessity of the relevant variable in the high-dimension multivariable data analysis method. My target is to develop a variable selection model in which the probability of the truly necessary variable being selected is 1, supposing that the number of samples is infinite (agreement).

Data science study requires the knowledge and competency of taking a wide view of data while paying attention to the background of data. A student who is familiar with and likes mathematical expressions would have good aptitude. Nowadays, less emphasis is placed on theoretical studies, however, it is impossible to use any analytical method proactively without theoretical validity. For this reason, I find theoretical studies to be very important. My goal is to spread statistics-based data analysis method throughout society. Why not join me for this theoretical study?