A study led by Hiroshima University finds that nuclear membrane protein Lem2 acts as a valve to control the size of the nucleus, keeping it in proportion to the size of the cell

Hiroshima, Japan – The size of the nucleus, often described as the command center of a cell, is proportional to cellular size, resulting in a constant ratio of nuclear and cellular volumes throughout the cell cycle. Using a deceptively simple system, multinucleate cells rely on the relative amount of cytoplasm to govern nucleus size, causing the nuclear volume to change in concert with cell growth.

In a study published this week in Nature Communications, a multinational research team from Hiroshima University and The Francis Crick Institute show that inner nuclear membrane protein Lem2 is key to nuclear size control in model eukaryotic organism Schizosaccharomyces pombe.

As lead author of the study, Dr Kazunori Kume of Hiroshima University explains how the team zeroed in on Lem2 and confirmed its role in nuclear size control.

“We created deletion mutants of various inner nuclear membrane proteins in S. pombe and assessed any resulting changes in the nuclear volume/cytoplasmic volume ratio. While no aberrations were detected in the single-mutant cells, deletion of Lem2 augmented the previously-documented nuclear enlargement of a rae1-167 mutant strain.”

Interestingly, the team also found that endoplasmic reticulum protein Lnp1 could compensate for the lack of Lem2, effectively acting as a secondary barrier to membrane flow. The presence of a back-up system highlights the importance of nuclear scaling to the physiology of the cell.

“We propose that Lem2 acts as a valve to control membrane flow into and out of the nuclear envelope, forming part of a nuclear size control mechanism,” says Dr Kume. “It is likely that similar mechanisms may regulate the sizes of other organelles in the eukaryotic subcellular membrane network, helping to keep these organelles in proportion to the rest of the cell.” 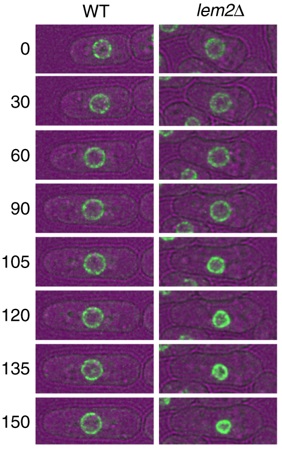 Difference in nuclear size of normal and mutant LEM2-deficient cells when treated with cerulenin.
The nucleus (green) of cells (magenta) with and without LEM2 (WT and lem2∆) reacting to a compound that inhibits membrane synthesis, called cerulenin. The cells without LEM2 shrink 105 minutes after the addition of cerulenin while the nucleus of the WT cells does not, showing that Lem2 is involved in maintenance of an appropriate nuclear size.