Simplified antibiotic may set the stage for antitumor treatments

Garden soil houses a variety of bacteria and their natural byproducts — including one that may help halt tumor growth. Lankacidins are molecules that can be isolated from Strepomyces rochei, a common bacterium in soil. In addition to antimicrobial properties, a type of lankacidins, called lankacidin C, can inhibit tumor activity in various cancer cell lines, including leukemia, melanoma, ovarian and breast cancers. Lankacidin C offers a potential foundation on which to design anticancer drugs, but its structure is complicated and difficult to manipulate, according to an international research group. The same group recently identified where antitumor activity is housed on the molecule and has now used that information to simplify lankacidin as a potential starting point to engineer treatments.

They published their results on Jan. 1 in Bioorganic & Medicinal Chemistry. 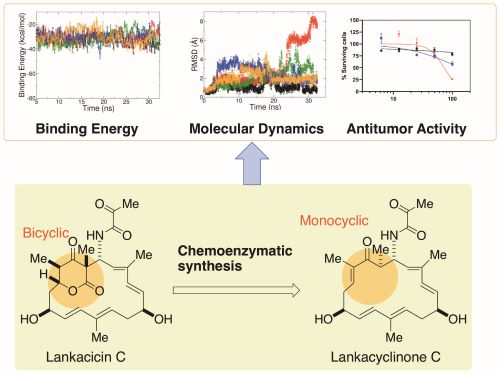 “Lankacidins have potential antitumor agents, however, their structural modification has somewhat problem due to the presence of complex bicyclic ring in lankacidin antibiotics,” said paper author Kenji Arakawa, associate professor at Hiroshima University’s Graduate School of Integrated Sciences for Life. “Structural modification of lankacidin C, as a mother compound, would be an excellent starting point for enhancing antitumor activity through computational prediction.”

The researchers preliminarily assessed how various components of lankacidin-group antibiotics may contribute to its antitumor activity using a computational model, finding that a structural ring of carbon atoms, called the delta-lactone ring, may not be essential. According to Arakawa, the implication was striking, since the ability to structurally modify lankacidins has been limited by the presence of the delta-lactone ring.

They used a protein called Orf23 to convert the bicyclic structure with the delta-lactone ring to a monocyclic version. A computational model predicted that the resulting lankacyclinone C, with a simplified ring, would still prove cytotoxic to target cancer cells. Experimental results supported the prediction.

According to Arakawa, the researchers plan to further investigate the rational design of molecular compounds with the goal of creating the ultimate antitumor agents.

The Japan Society for the Promotion of Science, the Ministry of Scientific Research/Science and Technology Development Fund, the Ministry of Education, Culture, Sports, Science and Technology of Japan, the Izaak Walton Killam Memorial Scholarship, the Natural Sciences and Engineering Research Council of Canada, the Canadian Institutes of Health and the Indonesia Endowment Fund for Education supported this work.