Key points of this research

The coralline alga Lithophyllum okamurae has a pink body with many short warts and is easily found in the lower intertidal zone and tide pools. Accordingly, this species has often appeared in field guides of coastal marine organisms and seaweeds for the general public.
This species was described by the Norwegian phycologist Mikael Foslie as Lithophyllum okamurae (Japanese name: Hira-ibo), based on specimens collected by the Japanese phycologist Kichisaburo Endo in Miura City, Kanagawa Prefecture (type locality) in 1899. In the following few years, Foslie described two forms of this species based on specimens from the type locality; however, it remained unclear which form was the genuine L. okamurae.

Therefore, we conducted research using genetic and morphological data of Endo's specimens, including the type specimens of these two forms, which are housed in the herbarium of the Norwegian University of Science and Technology, and newly collected specimens from the coasts of Japan. Both forms were genuine L. okamurae. Furthermore, the specimens collected by Endo contained a new species different from this species, so we named it "Lithophyllum neo-okamurae". L. okamurae and the new species were sympatrically distributed along the coasts of Japan. In addition, the existence of genetically conspecific entities with L. okamurae was confirmed in Taiwan and the Gulf of California. 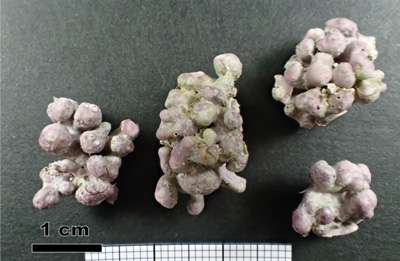 Recent studies have revealed that coralline algae are vulnerable to ocean acidification and global warming, and have been concerned that these environmental changes may negatively impact various organisms that coexist with coralline algae. On the other hand, it has recently been understood that definitions and distributional ranges of several dominant species based on morphological identification are often not accurately recognized. Accordingly, to ensure reproducible research on the responses of coralline algae to environmental stress, it is essential to apply reliable species names and understand the exact distributional range of each species.