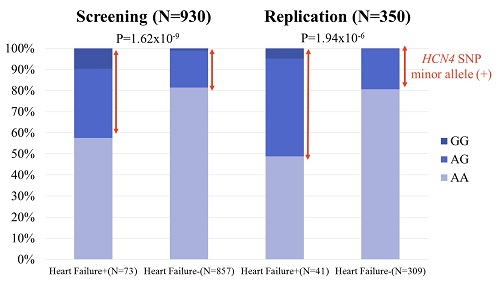 Scientists in Japan have found a potential marker to identify which people with abnormally fast heartbeats are at high risk of developing heart failure.

The results were published in June in Circulation: Genomic and Precision Medicine, a journal from the American Heart Association.

Atrial fibrillation, or chronically, abnormally fast heartbeat, can be a symptom of a potentially fatal disease known as tachycardia-induced cardiomyopathy (TIC). The condition can be reversed and damage can be prevented, but only if the heartbeat is brought back into proper rhythm through drugs or catheter therapy. TIC is currently only diagnosed after ruling out other potential heart disorders, and little is known about risk factors for TIC, according to study author Yukiko Nakano, an associate professor at the Graduate School of Biomedical & Health Sciences at Hiroshima University.

Now her team has taken a step toward diagnosing and treating the condition more quickly. The researchers identified a genetic marker that indicates when a person with a fast heartbeat is more likely to develop TIC and, eventually, heart failure. Heart disease is the third cause of death in Japan, according to the World Health Organization,

Previous studies have identified 26 genetic variants associated with atrial fibrillation. Of these, only two are cardiac ion channel genes, which help regulate the heart’s conduction. The gene HCN4 is the only one that is known to have a critical function in the autonomic control of heart rate, so Nakano and her team investigated how small changes in the gene could indicate a greater risk for developing heart failure in a study of 73 patients. The genetically different HCN4 marks which patients are at increased risk for heart failure.

While the researchers plan to further validate their results with a larger study cohort, they’re hopeful that they’re on the right track to help people at risk for cardiac damage or even death.

“We will be able to distinguish the high-risk atrial fibrillation patients developing heart failure and consider [them] for early therapeutic intervention,” Nakano said. “We can prevent their heart failure by stricter heart rate control or early rhythm control [using currently available heart devices and drugs].”

Nakano also said that this genetic marker could potentially serve as a therapeutic target for the development of a drug to help patients with atrial fibrillation maintain or restore a healthy heart rhythm.