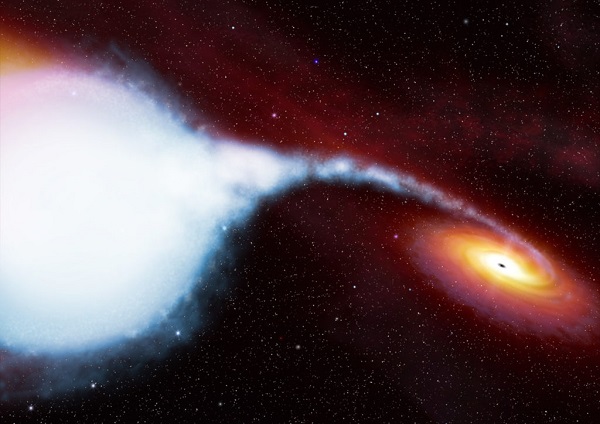 The black hole in Cygnus X-1 is one of the brightest sources of X-rays in the sky. The light near the black hole comes from matter siphoned off its companion star. (Image: NASA, ESA, Martin Kornmesser)

In an international collaboration between Japan and Sweden, scientists clarified how gravity affects the shape of matter near the black hole in binary system Cygnus X-1. Their findings, which were published in Nature Astronomy this month, may help scientists further understand the physics of strong gravity and the evolution of black holes and galaxies.

Near the center of the constellation of Cygnus is a star orbiting the first black hole discovered in the universe. Together, they form a binary system known as Cygnus X-1. This black hole is also one of the brightest sources of X-rays in the sky. However, the geometry of matter that gives rise to this light was uncertain. The research team revealed this information from a new technique called X-ray polarimetry.

Taking a picture of a black hole is not easy. For one thing, it is not yet possible to observe a black hole because light cannot escape it. Rather, instead of observing the black hole itself, scientists can observe light coming from matter close to the black hole. In the case of Cygnus X-1, this matter comes from the star that closely orbits the black hole.

Polarization filters light so that it vibrates in one direction. (Image: Masako Hayashi, CORE-U, Hiroshima University)

Most light that we see, like from the sun, vibrates in many directions. Polarization filters light so that it vibrates in one direction. It is how snow goggles with polarized lenses let skiers see more easily where they are going down the mountain – they work because the filter cuts light reflecting off of the snow.

"It's the same situation with hard X-rays around a black hole," Hiroshima University Assistant Professor and study coauthor Hiromitsu Takahashi said. “However, hard X-rays and gamma rays coming from near the black hole penetrate this filter. There are no such 'goggles' for these rays, so we need another special kind of treatment to direct and measure this scattering of light."

The team needed to figure out where the light was coming from and where it scattered. In order to make both of these measurements, they launched an X-ray polarimeter on a balloon called PoGO+. From there, the team could piece together what fraction of hard X-rays reflected off the accretion disk and identify the matter shape. 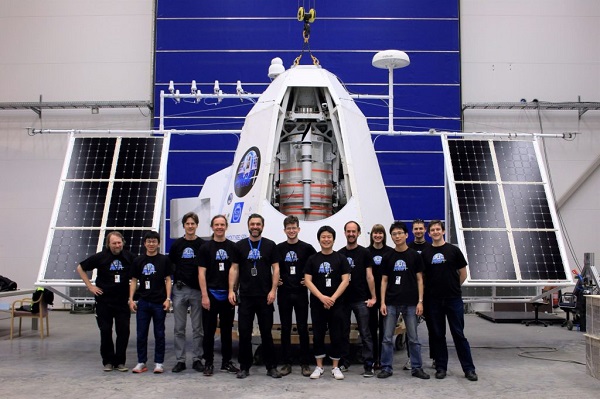 The PoGO+ satellite and research team. Takahashi is standing sixth from the right. (Photo: Hiromitsu Takahashi)

Two competing models describe how matter near a black hole can look in a binary system such as Cygnus X-1: the lamp-post and extended model. In the lamp-post model, the corona is compact and bound closely to the black hole. Photons bend toward the accretion disk, resulting in more reflected light. In the extended model, the corona is larger and spread around the vicinity of the black hole. In this case, the reflected light by the disk is weaker.

Since light did not bend that much under the strong gravity of the black hole, the team concluded that the black hole fit the extended corona model.

With this information, the researchers can uncover more characteristics about black holes. One example is its spin. The effects of spin can modify the space-time surrounding the black hole. Spin could also provide clues into the evolution of the black hole. It could be slowing down in speed since the beginning of the universe, or it could be accumulating matter and spinning faster.

"The black hole in Cygnus is one of many," Takahashi said. "We would like to study more black holes using X-ray polarimetry, like those closer to the center of galaxies. Maybe we better understand black hole evolution, as well as galaxy evolution."

A representation of two competing black hole models: lamp-post and extended. The black dot is the black hole, blue is its accretion disk, and red is the corona. (Image: Fumiya Imazato, Hiroshima University)