On an island laboratory, a scientist is drawn to the simple life forms

Associate Professor Kunifumi Tagawa explores the origins of chordates, which include humans, by studying the worm-like hemichordates and planula-like acoelomorphs. 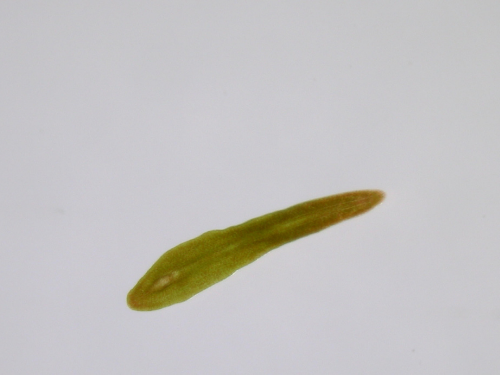 The acoel flatworm is about 3 mm long in size. This photo shows this animal's orange-colored head on the right side and its green tail on the left. (Courtesy Kunifumi Tagawa)

On Hiroshima’s Mukaishima Island, there’s a marine worm that’s so tiny, simple, and common, it appears rather unremarkable compared to the other marvels living in the ocean. Inside its squishy body, however, are wonders that could hold clues about rapid healing, regeneration, and our prehistoric ancestors.

It is perhaps fortunate that on the same island stands a marine biology laboratory, one of Japan's oldest, headed by a scientist best equipped to unravel the worm's mysteries.

Associate Professor Kunifumi Tagawa, a developmental biologist and director of Hiroshima University’s 88-year-old Marine Biological Laboratory, often stumbles upon a gathering of these worms on the island’s sandy shores.

By all accounts, simplicity encompasses every aspect of the acoel flatworm's life. Its needs are undemanding. It drifts in the water, lounges on the shore, and for food, all it needs is to sunbathe its translucent body to nourish the symbiotic microalgae inside that feed it. It’s extremely low maintenance that it can, and does, exist in all of the world’s oceans. Even its anatomy is uncomplicated. It has no body cavity, circulatory system, or gut. This simplicity is exactly what had drawn in Tagawa.

As a developmental biologist, he explores the origins of chordates, which include humans, by studying animals with the most primitive traits among the worm-like hemichordates and planula-like acoelomorphs.

Hemichordates are of particular interest from the evolutionary perspective because their ancestral features can help reconstruct a common ancestor from a branch of the tree of life that leads to humans. Over 500 million years ago, humans and hemichordates shared a common deuterostome ancestor — the first to form its anus before its mouth as an embryo. 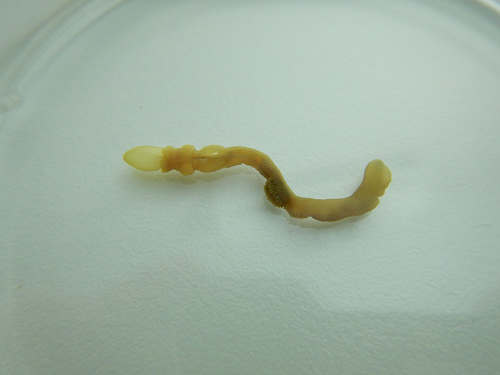 Tagawa’s quest to decode the development, regeneration, and evolution of hemichordates started over two decades ago when his graduate school mentor asked him to go to Hawaii to collect and spawn acorn worms.

“Nobody knows how to make them spawn,” Tagawa said of these invertebrates with acorn-shaped heads. A few years later, in 1998, he published his findings on the spawning and early development of the acorn worm Ptychodera flava abundant on the sandy coast of Oahu.

That same year, he started the world's first molecular developmental biology research on acorn worms and went on to explore their place in evolution.

“At first, I was not interested in evolution because it is hard to prove. I majored in chemistry, so I like getting accurate or clear results,” Tagawa said.

“But somehow, I got fascinated and am still working on this animal.”

Tagawa received his first Fujii Award from the Zoological Society of Japan in 2011 for his research on acorn worm regeneration, which could offer insights on regenerative medicine in humans.

“Usually, if we got the tip of our finger cut off, it won’t grow back. But this one can regrow its head. It can regrow lost body parts. So that’s why we are trying to compare what’s the difference between this worm and humans,” he said.

In 2015, he and other researchers sequenced the genome of two acorn worm species and found that we humans share 70% of our DNA with them. His work elucidated that the prehistoric ancestor of deuterostomes is an acorn worm-like creature.

And by studying the acoelomorpha, Tagawa can venture to ancient members of all bilaterally symmetric animals, called bilateria, many evolving guts that open at each end, allowing creatures to harvest more energy and grow larger. Acoel flatworms, a type of acoelomorpha, are thought to be the most ancient bilaterian.

Tagawa and a team of scientists published two years ago the entire genome sequence of the Praesagittifera naikaiensis, the acoel flatworm species on Mukaishima Island.

He said it is an excellent model organism in understanding why regrowing body parts is easy for it but not for us. 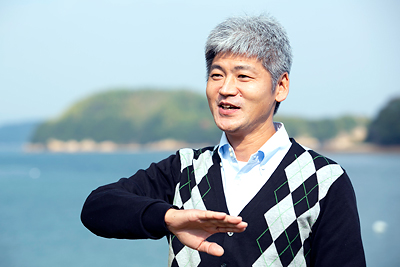 For more than 20 years, Tagawa has been researching chordate evolution. But his excitement on the topic has not waned.

“What excites me in my research is very simple — knowing new things. Knowing a new thing is always exciting.”