【Recent highlights】
Eiso Hiyama:
Using the genomic analyses of hepatoblastoma and neuroblastma, some pediatric tumors are derived from aberration of stem cell differentiation.

Immortality of human mesenchymal stem cell is acquired from telomere stability by ALT（Alternating lengthening of telomere）mechanism.

Yusuke Sotomaru:
The common marmosets have been an extremely useful animal model for human diseases research in various fields because they are more closely related than mice or rats to humans. We attempted the technical application of embryonic clone in marmoset and succeeded to produce the first embryonic clone marmoset.

【Education】
Eiso Hiyama:
Genomic, transcriptomic, proteomic and metabolomics analyses are available as the methodologies for life science research. After working out human genome, detection of rare mutation and expression and structural analysis of proteins as well as exhaustive analyses of genome were also available. Moreover, high resolution of imaging analyses leads to clarify the location of substances and gene expression. Using these methods, you can learn the methodological approach for life sciences

Yusuke Sotomaru:
Using mouse that is an important tool of the animal experiment, you can learn about reproductive engineering techniques (such as in vitro fertilization, cryopreservation of fertilized eggs and sperm, embryo transfer and so on) and the protocol of genetically modified animal production. In addition, you can also learn the latest knowledge about studies such as maintenance mechanism of undifferentiated status in ES cells and reproductive technologies of clone animals, and deepen your understanding about mechanism of development and differentiation of the mammalian early stage embryos.

Yusuke Sotomaru:
１．Improvement of the reproductive engineering techniques and the protocol of genetically-modified animal production
２．Study on reproductive technologies of clone and monozygotic animals in the mammal
３．Study on undifferentiated status and chimerism of ES cells 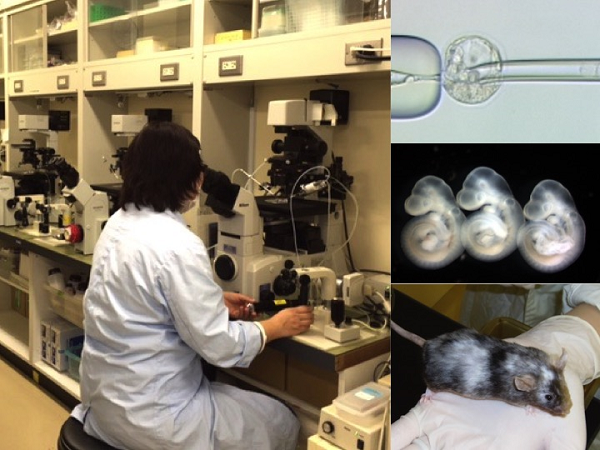