The Graduate School of Biosphere Science organized the 10th International Symposium on Food and Environment on November 4, 2017 as part of the Hiroshima University Homecoming Day festivities. 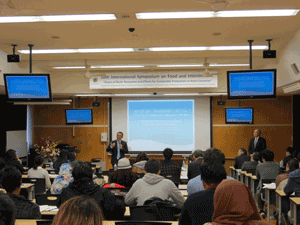 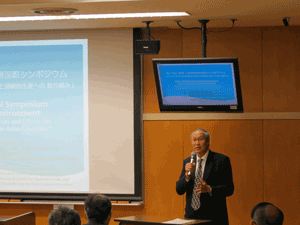 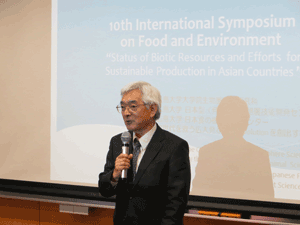 Opening message by Dr. Yukinori Yoshimura, the Dean of the Graduate School of Biosphere Science

The topics and speakers in Part 1 were “Overview of the Studies on Bioactive Peptides in Taiwan” presented by Dr. Wen-Dee Chiang (Department of Food Science, Tunghai University) and “Food Production and Environment Management Systems and Problems in Thailand” presented by Dr. Chaiyapoom Bunchasak (Department of Animal Science, Kasetsart University). 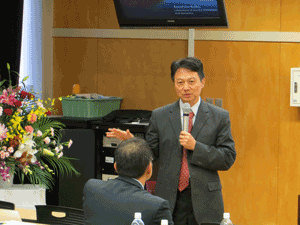 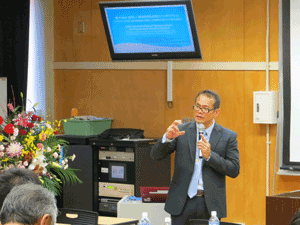 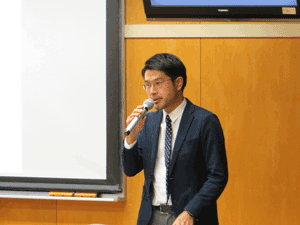 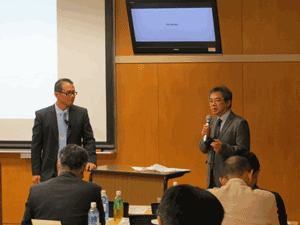 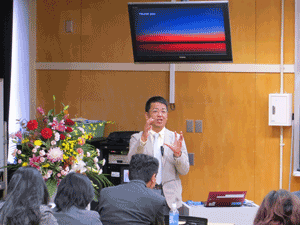 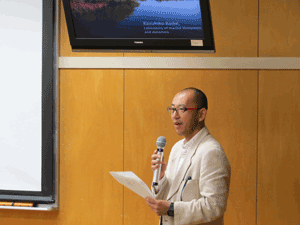 During the break time, two studies supported by the 2016 Grant-in-Aid for Research from the Graduate School of Biosphere Science were reported.  Poster presentations were also given by students of Hiroshima University and Tunghai University. 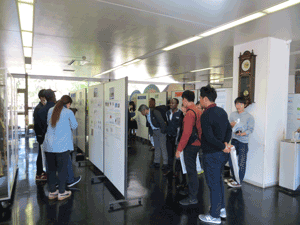 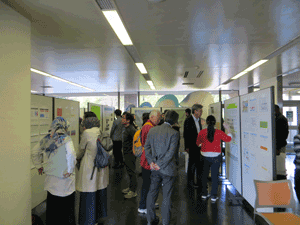 Human existence largely depends upon sustainable food production around the world.  However, various factors related to recent climate change, rapid human population increase and drastic changes of global socio-industrial structures caused by unprecedented development are affecting the production environment of biotic resources at the genetic, organismal and ecosystems level.  It becomes our great concern how to manage and produce sustainably such valuable biotic resources for clothing and medicine as well as nutritious foods that are essential for human life.

The invited speakers presented overviews and discussed current situations, issues and challenges affecting biotic resources and the environment towards their sustainable production in Asian countries.  Dr. Chiang defined bioactive peptides from various sources that may be useful in the genetic engineering of foods for the purpose of reducing the risks of obesity among consumers.  Some peptides identified by Dr. Chiang can promote lipolysis (fat breakdown) in adipocytes (fat bearing cells) through a series of intricate biochemical pathways, representing prospects for producing anti-obesity food ingredients.  Dr. Bunchasak, on the other hand, emphasized the emerging role of Thailand as the “food kitchen of the world” where various animal and plant products are produced with high efficiency and competitiveness.  However, the challenges of climate change and warming in a country that is already warm as it is, posed several questions on how to maintain acceptable global food standards especially in the broiler chicken industry.  Within the animal production industry, the warming climate has caused problems associated with heat stress, low feed intake, immunity suppression and the introduction of new pathogens and carriers.  Providing the ideal food production parameters at the ecosystems level was the theme of Dr. Koike’s presentation.  Using his own research conducted in Myanmar, he observed that environmental degradation has become prevalent there brought about by the disturbance of primary production and phytoplankton occurrence.  This has caused some “domino effect” up on the marine food chain that can potentially affect fisheries in the area.  Among the driving factors he cited were seasonal weather patterns exacerbated by river run-offs from deforested uplands and mangrove forest destruction.  His study also revealed the underappreciated role of microphytobenthos (unicellular algae inhabiting sediment surfaces) in controlling primary productivity in the area that can cause cascading effects upon fisheries and environmental quality. 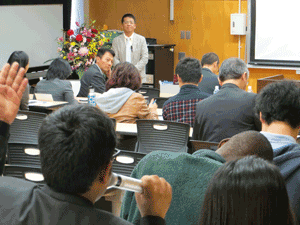 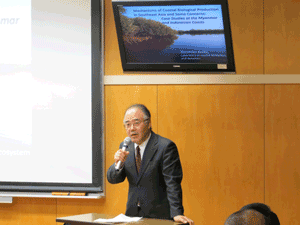