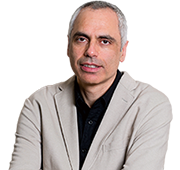 Enabling computers to see and think

Computer vision is still no match for human eyes

I am doing research in Machine Learning and Computer Vision, two fundamental technologies for Artificial Intelligence (AI). In the 1960s, Marvin Minsky at MIT asked one of his undergraduate students to “spend the summer linking a camera to a computer and getting the computer to describe what it saw.” This is said to be the beginning of Computer Vision. At that time, even experts thought that a few months would be enough for the completion of this task. Now, more than half a century later, we are still working on it (people in general also seem to think that vision is easy – what can be easier than that, you just open your eyes and can see the world…). While recent advances in AI technology have made it possible to defeat world’s best players of Go, still autonomous visual perception has not even reached the level of a 2-year old infant. This actually shows what a challenging research problem it is.

AI is a really interdisciplinary field

When I first began working in this area, I was thinking that trying to imitate biological visual systems would lead to very successful computer vision algorithms. At that time, however, methods based on geometry and statistical pattern recognition seemed to be more effective, and one had to study these too. Things have changed recently and now there is a renewed interest in brain-inspired algorithms like deep learning. Thus, AI is a really interdisciplinary field that draws upon a very diverse domain of academic studies – from mathematics to psychology. If you are interested in AI, mathematical knowledge (especially; linear algebra, calculus, probability and statistics) and programming skill are of particular importance. My advice is to concentrate especially on maths right after entering the university, as it can take a considerable amount of time to master.

For many researchers in Artificial Intelligence, the final goal is the creation of Artificial General Intelligence (building AI systems which possess general intelligence at the human level). There are quite a few approaches to develop it, and I anticipate that a possible breakthrough could come from brain-inspired approaches which try to emulate the function of the human brain into a computer hardware. Numerous large-scale brain projects have been launched recently in many countries, which promise to accelerate our understanding of the brain and its computational principles. So probably in not too distant future until AGI could really be created. I would like to welcome interested high school students to join us at the School of Informatics and Data Science to gain diverse knowledge and understanding of the various technologies in this area, with a view to contributing to solve the many problems facing our society today.