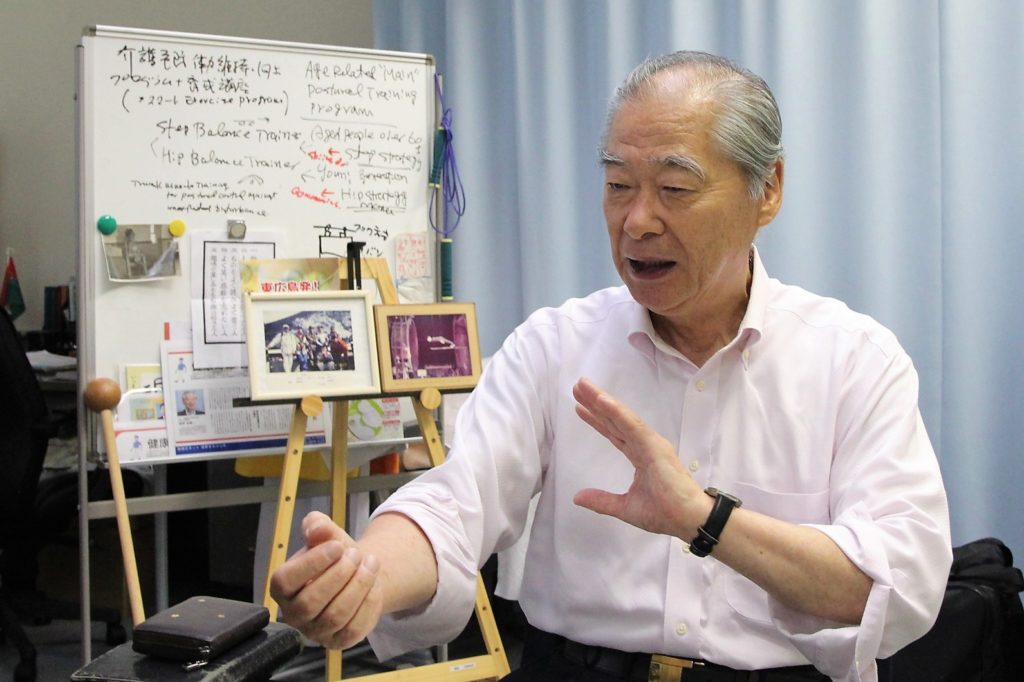 "Keeping balance is one of the most important factors in human movement, both in elderly people and in Olympic athletes." – Dr. Kazuhiko Watanabe (Photo: PR Group, Hiroshima University)

Kazuhiko Watanabe is a biomechanist and Director of the Sports and Health Science Laboratory at Hiroshima University. He may have retired in 2008, but this Emeritus Professor is still very much involved with community inside and outside of the university. Watanabe’s research focuses on posture control and improving people’s quality of life – from Olympic ski jumpers to elderly people.

Do you play any sports?

I enjoy kendo and skiing. Kendo is more of a skill-based sport than, say, judo. So even at eighty or ninety years old, you could play kendo with someone in a younger generation. As for skiing, I was born near Niseko, a mountain resort in Hokkaido. I skied often while growing up there.

Did growing up skiing influence your interest in researching and working with ski jumpers?

Yes, in a way. In 1972, Sapporo hosted the Olympic Games. My advisor at University of Tokyo, where I went to graduate school, was a training doctor of the Japan alpine skiing team. My colleagues and I would sometimes go to Sapporo or invite athletes to our lab at University of Tokyo, where we measured and collected data on how their form remains stable while skiing at such high speeds. Through wind tunnel experiments, I found that the best posture to accomplish this in downhill skiing is "the Egg Shape."

In 1980, the Ski Association of Japan recruited me to train the Japanese ski jumping and Nordic Combined teams playing in Lake Placid, New York. I worked for these teams for a long time – including with the 1998 Olympics in Nagano, up through the 2002 Olympics in Salt Lake City, Utah! 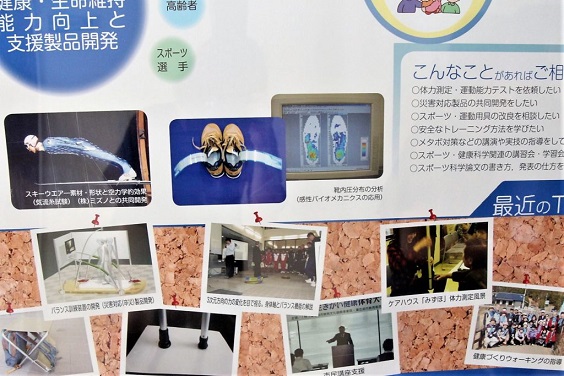 I worked with the Japan Society of Physical Fitness and Sport Medicine. Nearly thirty years ago, I was involved with a project in which we researched how to develop elderly people’s fitness and activity level, as well as their mental wellness. A year later, while I was working at Hiroshima University, I decided to work more specifically with the community of Higashihiroshima City.

Our group opened a community college in Higashihiroshima City. The population of this city is about 200,000 people. Almost one quarter of them are over 65 years old, and it is getting more difficult to expand care coverage. Our idea to address this problem was to begin a class to train Community Leaders – people to serve in community health and help care for the elderly. They learn how to teach walking lessons, nutrition, new sports, and how to respond to emergency medical situations such as cardiac arrest.

We also work with radio. The radio exercises people in Japan typically hear growing up, like on NHK, might be a little too heavy for older people. So, we developed fitness programs that involve isokinetic action. Isokinetic means, “same movement, same speed.” These exercises are not so injurious to muscles or tendons. People can listen along and exercise to these exercises, which are paired with music.

We also started the Higashihiroshima Walking Club. When we first started seven years ago, we had only four or five members. Now, there are more than ninety. We meet to walk every month in one of nine towns around the city, including Saijo and Akitsu. As part of the Hiroshima Prefectural Walking Association, I also helped organize this year’s Annual Peace Walk, one of the biggest walking events in Hiroshima. About 1500 people from all over Japan came, even as far away as Hokkaido.

That’s a lot of people, and from so far away! Why is walking so important for elderly people?

Besides being good for one’s physical health, knowing how to walk properly is important for protecting oneself during natural disasters like earthquakes, tsunami, or flood. This idea is called o-sai (応災), or research on helping people take safe and secure actions in the case of a disaster. The basic idea is to evacuate safely and keep one’s physical strength and motion capability while awaiting rescue.

For example, recently western Japan had heavy rain, flooding, and landslides. Over 200 people died in this disaster, including at least ten in Higashihiroshima. Some people were limited to staying where they were. So, if another disaster happens like this again, how will they escape from their house or other places? If you can walk, even with a stick, you need to learn how to walk properly to get help. At my lab, we organize o-sai walking lessons, present health-related lectures to community members, and develop balance ability training equipment.

Are there any similarities between working with elderly people and Olympic athletes?

We are interested in exploring why people fall and how people develop balance skills. Keeping balance is one of the most important factors in human movement, both in elderly people and in Olympic athletes.

When slipping or tripping, young people tend to be okay. As people get older, though, the risk of falling becomes bigger. The role of the central nervous system in controlling balance is very important in elderly people, especially with co-contraction. So, my question is, how can we train people of different ages properly for walking and protecting from falling?

I sometimes invite elderly people from care homes to my laboratory to teach healthy exercises and check the stability of their walking. At our lab, we designed and built a machine that simulates an unstable ground or floor, and we can control how slow or fast the floor moves back and forth. By measuring how someone’s body shifts in response to this floor, we can find out his or her mechanism of co-contraction.

Walking and control of co-contraction are some of the most important qualities of physical health. I hope my projects will cover all of Higashihiroshima City and improve people’s quality of life. 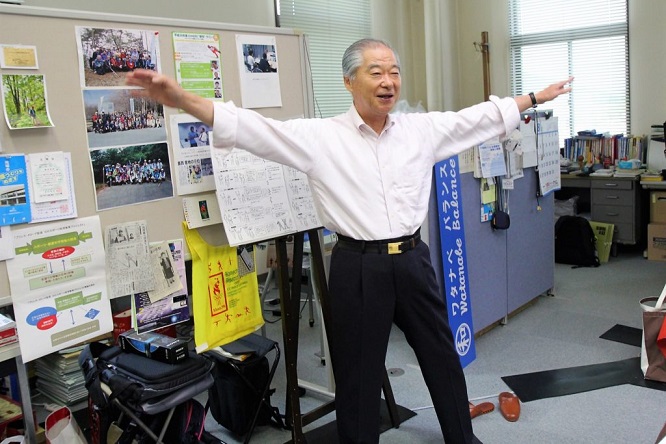