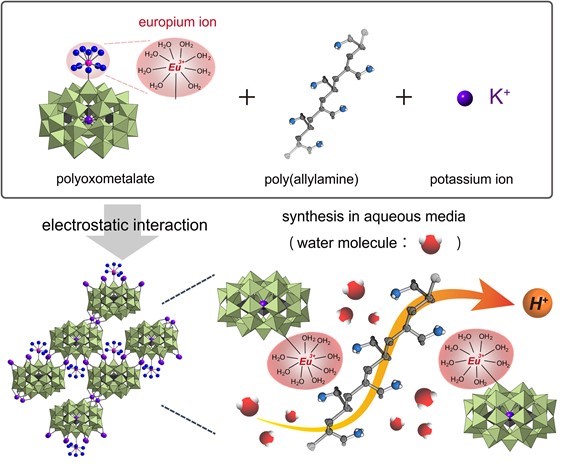 Protons are the next big thing when it comes to fuel cell technology. The subatomic exchange produces power on a scale that challenges contemporary solid-state fuel cell technology, used to help power space shuttles. To realize the proton-based technology sooner, an international team of researchers have developed a hybrid material that effectively transports protons at high temperatures and humidity — two major challenges in past attempts.

The results were published on April 19 in ACS Applied Materials & Interfaces, a journal of the American Chemical Society.

The team, led by the University of Tokyo in Japan, focused on a material called polyoxometalates (POMs), which they previously fabricated into a composite with another polymer and compounds to help provide structural stability.

“POMs are attractive as building blocks for the design and synthesis of new materials with desirable properties and functions — they can efficiently transport protons, for example, but only at low temperatures and in low humidity,” said paper author Masahiro Sadakane, professor in the Graduate School of Advanced Science and Engineering, Hiroshima University. “Unfortunately, a huge problem remained to be solved is that our composite decomposed at higher temperatures and humidity.”

They settled on incorporating europium, a metallic element that is solid at room temperature, into the material. Europium is particularly attractive to water molecules, which brings external oxygen into the material. Protons move through the system by attaching to the oxygen. The more oxygen, the more proton-conductive the process is.

“Our goal is to produce stable high proton-conductive materials,” said paper author Sayaka Uchida, associate professor in the Department of Basic Science, School of Arts and Sciences, The University of Tokyo. “Through fine control of the components, we produced such a material.”

“We plan to increase the stability and proton conductivity so that this material can be used as an electrolyte in fuel cells, enhancing their performance,” Sadakane said. “This work could provide guidance for the design of solid-state proton conductors.”

The Japan Society for the Promotion of Science and the International Network on Polyoxometalate Science at Hiroshima University funded this work.