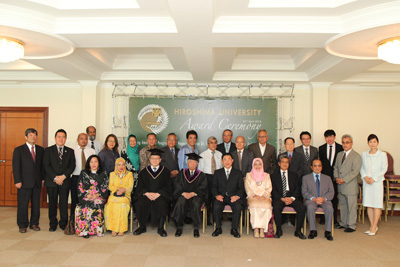 On April 22, 2013, Mr. Pengiran Yusof, a former student from Southeast Asia was awarded an honorary doctorate degree during a ceremony held at the Embassy of Japan in Brunei Darussalam.

In 1944, Mr. Pengiran Yusof was a government sponsored overseas student who visited Japan as a student from Southeast Asia, and in April of 1945 attended the Hiroshima University of Literature and Science, one of the predecessors of Hiroshima University. However, although that year he was able to narrowly escape with his life from the atomic bomb, he was forced to discontinue his studies in Hiroshima.

After his return home, he became Brunei’s first Prime Minister. He played a significant role in the independence and development of his home country and endeavored to strengthen the ties of friendship between Brunei and Japan. Additionally, he tried to convey his experience in Hiroshima to many people, and contributed to the promotion of peace activities. It is for these reasons that our university decided to award him with an honorary doctorate degree.

All together about 30 people attended the award ceremony including relatives, other persons connected with Mr. Yusof and members of the Brunei Japan Friendship Association.

There were also two other former students who received honorary doctoral degrees before Mr. Yusof’s ceremony: Mr. Hasan Rahaya from Indonesia (a former member of the Indonesian Parliament) and Mr. Abdul Razak from Malaysia (a former teacher of Universiti Teknologi MARA), who attended the Hiroshima University of Literature and Science as students from Southeast Asia and were survivors of the A-Bomb. Our university will continue efforts towards the realization of “Pursuit of peace”, one of the Five Guiding Principles of Hiroshima University.