This contest was co-hosted by Hiroshima University Vietnam Center, Komaru Transportation Foundation, and the Faculty of Japanese Studies, Vietnam National University, USSH. It was the first time that the contest was held in Vietnam, and its theme was “transportation.” After the essay contest was announced to the universities within southern Vietnam, 49 students from 8 universities applied to take part, and 16 students were then selected to present their speech at the auditorium of the University of Social Sciences & Humanities. At the venue, an audience of around 200 people, comprising Japanese language students and teachers were gathered.

At the beginning of the contest, Mr. Shigehiro Komaru (Senior Managing Director of Komaru Transportation Foundation, and Representative Director and President of Fukuyama Transporting Co., Ltd.) and Prof. Nguyen Tien Luc (Dean, Faculty of Japanese Studies, USSH and the Chairperson of the Hiroshima University -Vietnam Alumni Association), gave their opening addresses. Following these addresses, the Counsel General of Japan in Ho Chi Minh City, Junichi Kawaue, gave a speech in which he endorsed the event for promoting friendship between Japan and Vietnam, and fostering human resources who will encourage greater communication and collaboration between the two countries.

Following the opening addresses, 16 students made speeches in fluent Japanese, and after careful consideration Nguyen Quoc Khanh from the University of Social Sciences & Humanities was awarded first prize.

At the end of the contest, Professor Yoshichika Honda from the International Center of Hiroshima University made closing remarks, which the audience listened to in rapt attention until the end. 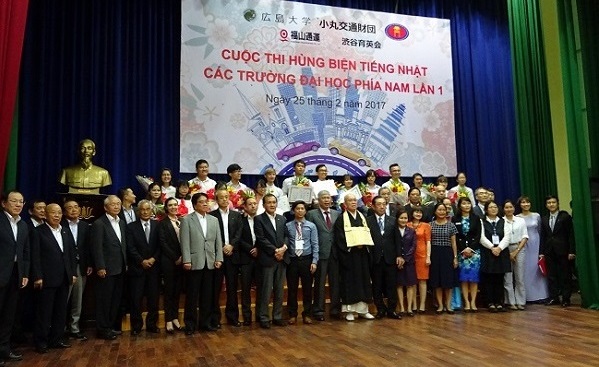