Participating in USSH’s May Festival in Ho Chi Minh City

On May 26th 2018, Hiroshima University participated in the May Festival (Satsuki Matsuri) held at the Faculty of Japanese Studies of the University of Social Sciences and Humanities, Vietnam National University, in Ho Chi Minh City (USSH). This cultural event is held every year in May by the Faculty of Japanese Studies of USSH. HU, which has one of its overseas bases in USSH, is also active in helping to support the creation and conduction of this event each year.

In the beginning of the event, the Consul General of Japan in Ho Chi Minh City and Dr. Huynh Trong Hien, organizer of the May Festival and Dean of the USSH Faculty of Japanese Studies, gave their welcome speeches on the main stage of the auditorium. Lectures were also given by the guest speakers. Afterwards, the students gave their performances on the stage. 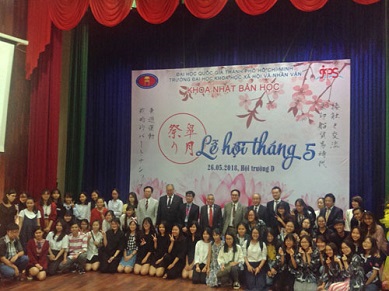 Commemorative photo of the participants (taken in the morning)

During the lunch hour, exhibition stands presented various aspects of Japanese culture, including studying in Japan, during which our staff introduced Hiroshima University and its overseas study programs. As a fun way to experience Japanese culture, origami paper folding was offered for those interested. 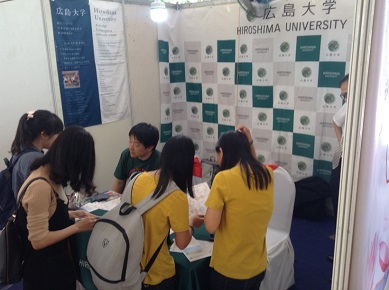 From the afternoon onwards, the students held a “Red and White singing contest” on the main stage, showcasing songs and dance performances, displaying a variety of styles and skills as a testament to their commitment and hard work. 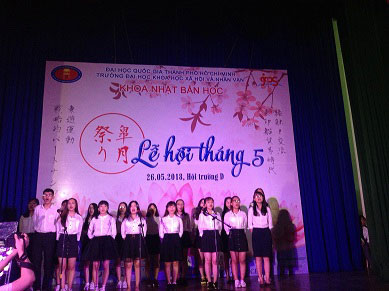 As part of its START Program (Study Tour Abroad for Realization and Transformation), HU every year sends 20 to 30 students to USSH where they experience student life, such as attending classes taught by the Vietnamese teachers, and thus deepening friendships with local students. Through HU’s yearly participation in the May Festival, and through the success of the START Program, it is hoped that academic exchange and collaboration between the two universities will be further promoted.