My name is Cui Ming Fu.

I first came to Japan in 2001. I completed my Master’s Course for Learning Development at the Graduate School of Education in March 2007 and my PhD for the same course in March 2011. I then returned to China to teach at Changchun University.

During my ten years studying in Japan, I always had unfailing support from the people around me. I was fortunate enough to be exempted from paying the tuition fees, and obtained scholarships for my studies. All in all, I was really blessed to have an ideal environment that allowed me to fully concentrate on my studies. Looking back, if it was not for the support I received back then, I wouldn’t have completed my PhD course, nor could I imagine what my life would be like now. In my heart, I will always be grateful to the people who supported me, and to Hiroshima University for making me what I am today.

In 2011 when I was working at Changchun, my students and colleagues gave me the nickname “The pretty teacher,” but the nickname had nothing to do with my looks. It was because of the habits I absorbed during the years I spent in Japan; to greet people around me with a smile, and to dress with care every day in the workplace.

During this teaching period, I not only taught my students the knowledge I had gained at Hiroshima University, but also strived to convey the beauty of Japanese culture and its history. Because of years spent in Japan, I had a hard time getting used to the life back in China. Also, I couldn’t get over the desire to come back to Hiroshima University. Finally, my dream came true; I was accepted as a postdoctoral researcher at the Hiroshima University Graduate School of Education in 2015. The joy I felt then is still unforgettable.

I completed my postdoctoral research in March 2016, and started working at another department in Hiroshima University from April of the same year. My present job mainly deals with international exchange with overseas institutions.

It has been almost six months since I started working at my current department. Apart from the delight at learning new skills in a new environment, I also feel a little nervous about fulfilling my responsibilities. Bearing in mind the initial enthusiasm I had when I first came to Japan, I will continue to work hard.

*Jyaken means “that’s why” in the Hiroshima dialect.

This essay was written in September 2016.
(Original version: Japanese) 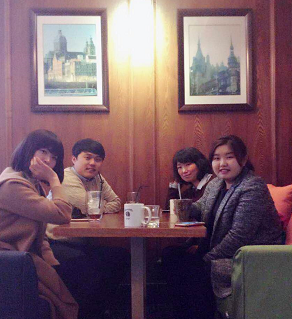 Photo above: With my students I taught at elementary school 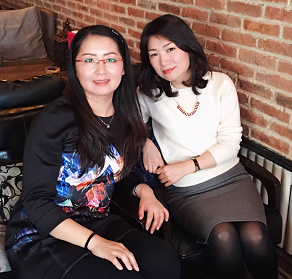 Photo above: With my former colleague at Changchun University 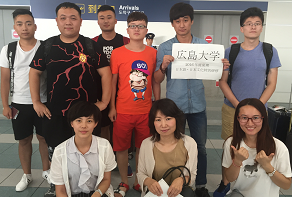 Photo above: Greeting the participants of the Japanese Language and Culture Special Program at the airport

Affiliation during study at Hiroshima University