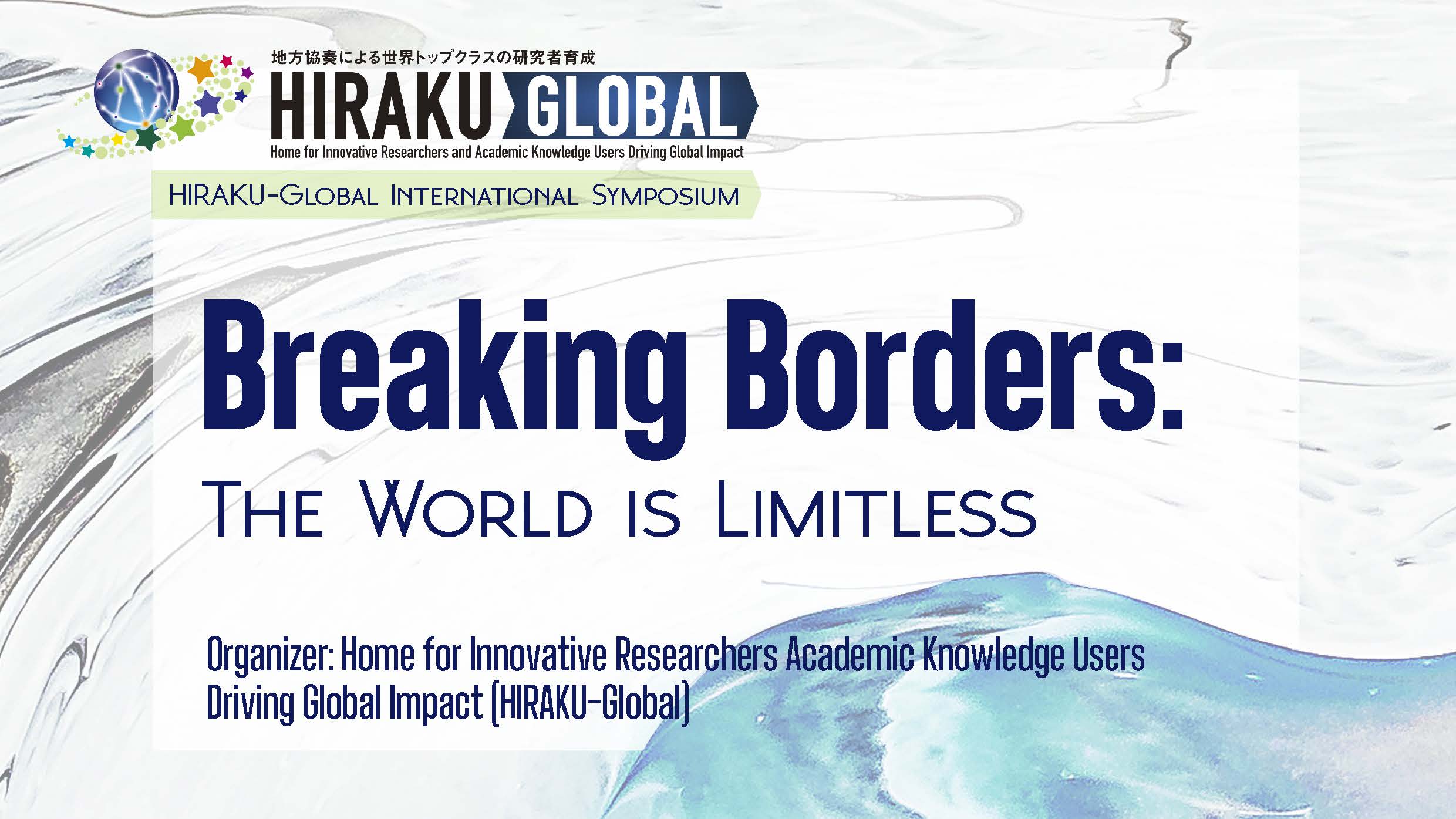 With the Program Manager of the HIRAKU-Global Program, Professor Jorge N. TENDEIRO as the Master of Ceremonies (MC), the event began with the Opening Remarks and Guest Speech from Dr. Mitsuo OCHI, President of Hiroshima University and Mr. Yoshihide MIWA from the Ministry of Education, Culture, Sports, Science and Technology (MEXT) respectively. Thereafter, Professor Misako AIDA, Executive Advisor to the President of Hiroshima University and Chair of the HIRAKU-Global Program Management and Evaluation Development committees provided a concise outline of the Program.

Following on from the Opening Session, the Visionary Empowerment Lecture for Researchers was presented by HIRAKU-Global Advisory Board Member (ABM) Professor Robert W. MAHLEY, President Emeritus and Founder, Gladstone Institutes, USA. With the presentation title of “Guiding Young Scientists: Suggested Secrets of Success”, Professor MAHLEY was able to provide a unique insight into the “Vision” and “Hard Work” that is required by all young researchers to set them on the way to being successful, world-class researchers. An interactive Q&A Session followed, where the audience members were able to present any questions they had to him via Zoom’s Q&A feature.

Thereafter, the Professional Empowerment Lectures for Researchers and Organizations were presented by ABMs Professor Alastair G. McEWAN, Pro-Vice-Chancellor (Research Training), The University of Queensland, Australia, and Professor Jeremy P. BRADSHAW, Pro-Vice-Chancellor (International & Doctoral), University of Bath, UK. With their respective titles of “Early-Career Researcher Development in Australia” and “Early-Career Researcher Development in Europe”, they were able to detail the initiatives that their own institutions and those within their respective regions are putting into researcher development, which provided the opportunity for everyone to clearly see the work that is currently being undertaken globally towards developing world-class researchers. Once again, an interactive Q&A Session was held at the conclusion of the two lectures.

After a short break, the 3 Minute Visionary Pitch by the 1st HIRAKU-Global Researchers Cohort allowed all seven of the HGRs the opportunity to describe who they are and the research they undertake. Following this, and as a prologue to the Panel Talk, ABMs Dr. Yuko HARAYAMA, Executive Director, RIKEN and Professor Takashi TODA, Specially Appointed Professor, Hiroshima University, provided incisive talks outlining the problems that young researchers in Japan face and what is needed to overcome these obstacles.

For the Panel Talk moderated by the MC, the five ABMs and seven HGRs discussed the various “challenges faced by early career researchers in a global world”, and looked at how some of the issues could be tackled and solved. All kinds of topics were covered within the Talk, including how to create networks internationally, conducting research in a competitive environment, adapting to unexpected issues/occurrences, working effectively in a team, amongst others. The topics brought forward by the MC, ABMs and HGRs were also supplemented by topics and questions brought forward from the audience via the Q&A feature.

At the conclusion of all of the Sessions, the HIRAKU-Global International Symposium was summarized and formally concluded by Professor Shinichi TATE, Executive Vice President, Hiroshima University and Chair of the HIRAKU-Global Operating Council, with his thought-provoking Closing Remarks.

Following on from the Symposium, an Online Gathering was also held in which the pre-registered audience members had the opportunity to interact with the ABMs, HGRs and each other. The participants were able to share their experiences and directly discuss any questions and concerns which they wanted to be covered, and at the end of it all, an eventful day full of insight, knowledge, discussion, and smiles all-round was smoothly concluded.