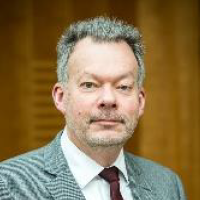 As Pro-Vice-Chancellor (International & Doctoral) at the University of Bath, a post he has held since early 2018, Professor Bradshaw is responsible for the growth and development of the University of Bath’s new Doctoral College, as well as leading the international development of the institution and enhancing its reputation for excellent doctoral provision.

Professor Bradshaw gained a MA in Zoology from Oxford University in 1981. Following a year in industry he was awarded a DPhil from the same university in 1985, based upon research carried out in Sir David Phillip's Laboratory of Molecular Biophysics.

After a year of postdoctoral fellowship Professor Bradshaw took up his first teaching post in the Department of Biochemistry at Edinburgh in 1986. Here he developed a research programme in biophysical studies of membrane-active peptides.

In 2003 Jeremy was appointed to the post of Director of Research and Graduate Studies at the Royal (Dick) School of Veterinary Studies. In 2007 he became the Head of the Graduate School of the College of Medicine and Veterinary Medicine at the University of Edinburgh, a post he held for two years.

From 2009 to 2013, he was Director of Postgraduate Studies for the College and became International Dean and Director of Quality Assurance. Over the next few years, he led a project that resulted in the Zhejiang-Edinburgh Institute that delivers a collaborative BSc in Integrative Biomedical Sciences.

Jeremy became Assistant Principal (Researcher Development) in 2013, with institutional responsibility for 4,500 research students. The role includes representing the University on the Doctoral Studies groups of the Russell Group, the League of European Research Universities, Universitas 21, and the Coimbra Group. He currently chairs the Coimbra Group Doctoral Studies Working Group.

Jeremy is a Fellow of the Society of Biology and formerly chaired its Biomedical Sciences Committee. He has been a QAA reviewer since October 2010 and has conducted reviews in England and Scotland. He has also conducted a number of transnational education reviews for QAA, and has been a reviewer for the University Grants Committee of Hong Kong Quality Assurance Council, the Academic Quality Agency for New Zealand Universities, the Quality Enhancement Framework for Icelandic Higher Education, and the Albanian Accreditation Agency for Higher Education.

Jeremy has published over a hundred papers, articles and reports. These have been mainly based on research carried out at large-scale international facilities, such as ISIS Neutron and Muon Source at the Rutherford Appleton Laboratory, the Institut Laue-Langevin in France, and The High Energy Accelerator Research Organization, known as KEK, in Japan.