On 24th October 2020 the UN Treaty on the Prohibition of Nuclear Weapons reached 50 ratifications, ensuring its entry into force. In line with this, a group of high school and university students from Hiroshima who are active in peace activities gathered in front of the Cenotaph for the Atomic Bomb Victims in the Hiroshima Peace Memorial Park. Some students read short speeches in Japanese and English, rejoicing about the good news and promising to continue their peace activities for the total elimination of nuclear weapons. Four IGS students who are Youth Peace Volunteers were part of the assembly. The mayor of Hiroshima City, Mayor Kazumi Matsui, and the Secretary General of Mayors for Peace, Takashi Koizumi also attended.

Here is the speech of Yuto Nakamura, one of the IGS students who attended and read a speech at the assembly.
“For many years, many citizens all around the globe extensively sought greater understanding of hibakusha’s messages. We would like to rejoice that such efforts have been successful and led to ensure the treaty’s entry into force.
On the other hand, I think we are now faced with a significant challenge—that is, what we, the young generation, can do to encourage international society, including nuclear-armed states, to make steady progress toward the abolition of nuclear weapons.
Aiming to realize a peaceful world free of nuclear weapons, we hereby determine to continue our utmost efforts with our friends. Please watch over us.” 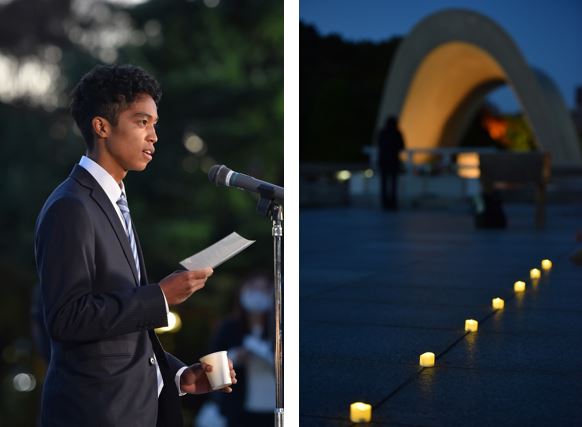